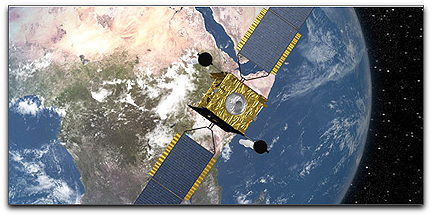 Skynet 5a satellite
[SatNews] Jean-Yves Le Gall, Arianespace Chairman and CEO, has announced the launch contract signing of the Skynet 5D satellite with Astrium. Arianespace had already been selected by Astrium to launch the Skynet 5A, 5B and 5C satellites.

As is the case for the three previous spacecraft in the Skynet 5 family, Skynet 5D will be placed in geostationary transfer orbit by an Ariane 5 launcher from the Guiana Space Center in French Guiana. Launch is scheduled for the first half of 2013. Skynet 5D will be orbited by Arianespace for Astrium, which is contracted to deliver the satellite in orbit to the company Paradigm Secure Communications, a wholly owned subsidiary of Astrium. Astrium's Secure SatCom Systems is the prime system integrator and system design authority for Skynet 5. Paradigm offers secure communications services to the British armed forces, NATO, other European countries, the USA as well as Australia. 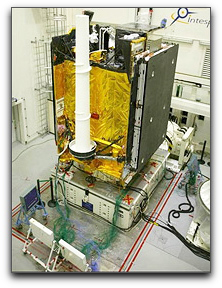 The Skynet 5 satellite can issue communications signals between headquarters in the UK and British forces deployed around the world.
Built by Astrium using a Eurostar E-3000 LX platform, carrying powerful X-band transponders, Skynet 5D will weigh 4,800 kg. at launch. Previously, Arianespace orbited the Skynet 4B, 4C, 4E and 4F satellites for the British Ministry of Defence. Skynet 5D is the 35th military payload to have selected an Ariane launch. This latest contract clearly illustrates the strategic facet of Ariane 5, which guarantees independent access to space for all European governments. The Ariane 5 launcher is one of the keys to the development of a common European security policy, since it plays a pivotal role in the indispensable space segment. Since the beginning of the year, Arianespace has signed 7 launch contracts for geostationary satellites and 5 dedicated Soyuz launches.