[SatNews] Arianespace has signed a launch service contract with Airbus Defence & Space to launch the PeruSat-1 satellite for the government of Peru, using a Vega launch vehicle.

Arianespace Chairman and CEO Stéphane Israël (front left) and Airbus Defence & Space’s Eric Béranger (front right) marked the signature of a launch service contract for PeruSat-1 during a ceremony held at the "Quai d'Orsay" (French foreign office) in Paris. The event was attended by Christian Masset, Secretary-General of the French Ministry of Foreign Affairs (back right), and Jakke Valakivi Alvarez, Deputy Minister of Defense for Peru (back left).

Built by Airbus Defence & Space in Toulouse, PeruSat-1 is a high-resolution Earth observation satellite. The first satellite of this type to be operated by Peru, it will be placed in Sun-synchronous orbit. It will weigh about 450 kg at launch. The launch is scheduled for 2016 from the Guiana Space Center in French Guiana, using a Vega light launcher.

The ceremony announcing the signature of this contract was held at the "Quai d'Orsay" (the French foreign office) in Paris, and was attended by Christian Masset, Secretary-General of the French Ministry of Foreign Affairs, and Jakke Valakivi Alvarez, Deputy Minister of Defense for Peru. 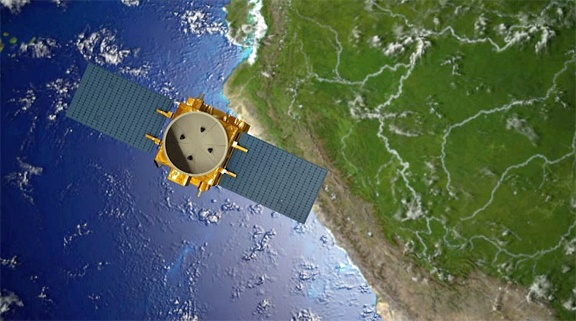 Following the ceremony, Arianespace Chairman and CEO, Stéphane Israël, said, "Airbus Defence and Space has entrusted us with a key mission, to launch this landmark satellite for its customer, Peru, using the Vega launcher, for which our partner ELV is the prime contractor. With this third launch contract since the start of the year, Vega consolidates its leadership in the export market, for both governmental and commercial missions."