Nanyang Tech University ...This ZigBee Is A BusyBee... Equipped With Inter-Satellite Comms System

[SatNews] To estimate the range of inter-satellite communication in free space, the team applied a link budget analysis based on the Friis transmission equation, deriving... 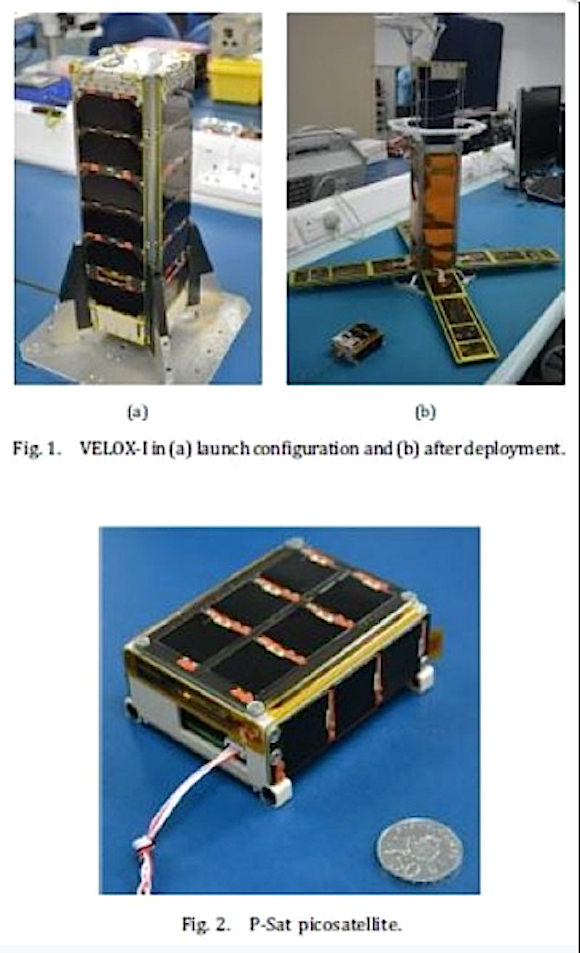 The team at the Satellite Research Center launched the VELOX-I, which consists of a nanosatellite weighing 3.5 kg and a piggyback picosatellite weighing 1.5 kg, from the two highest points on campus. Both miniature satellites were configured with a ZigBee wireless network and equipped with small sensor nodes that perform functions such as local sensing, distributed computing and data-gathering.

Designed to evaluate the performance of wireless sensor networks (WSNs) in space, the experiment marks a breakthrough in aeronautical engineering. After conducting Received Signal Strength Indicator tests on the satellites' radio frequency modules, a maximum range of 1 km was found to be achievable for inter-satellite communication in the campus environment. An even longer communication range can be expected in free space, due to the absence of signal attenuation caused by fading and diffraction.

To estimate the range of inter-satellite communication in free space, the team applied a link budget analysis based on the Friis transmission equation, deriving an average theoretical distance of 4.186 km and a maximum of 15.552 km. Published in the special issue of Unmanned Systems, these findings present a compelling case for further studies into inter-satellite communication systems with more complex designs.

In addition to their high performance in inter-satellite communication, WSNs are also remarkably suitable for intra-satellite communication. The team found that by replacing internally wired connections with wireless links, a satellite's mass could be reduced by as much as 10 percent. With the twin pressures of minimizing development costs and maximizing risk diversification imposing major constraints on satellite design, the production of comprehensive yet lightweight systems could benefit significantly from WSNs.

Although WSNs have been used in a wide range of applications in recent years, their use in space applications has, until now, remained limited. The Singaporean team's data-driven survey has established a sound platform for future formation-flying satellite missions, and seems poised to create subsequent revolutions in space.

The Nanyang Technological University infosite may be accessed at http://www.nbs.ntu.edu.sg/

Editor's note
Similar to Bluetooth, ZigBee is a spec that was developed for use in WPANs (Wireless Personal Area Networks) and is especially useful when traverse large distances need to be traversed in low power networks. ZigBee networks are decentralized and fully scalable, support star and peer-to-peer networks and also adds in mesh networking capabilities and multi-hop functionality on the IEEE 802.15.4 standard. ZigBee is used in circumstances where the main need is for ad hoc routing, the size of the network, and power efficiency, rather than concerns for the data transfer rate.

The above story is based on materials provided by World Scientific.