[SatNews] There are estimated to be more than 10,000 near Earth asteroids that could destroy a major city and a hundred that would end civilization.

McLEAN, VA – February 15 – Today’s impact in Russia and the near miss by asteroid 2012 DA14 should shock the world into creating a sentry line of spacecraft circling the Earth to intercept and evaluate incoming threats, Deep Space Industries proposed.

“The hundreds of people injured in northern Russia show it’s time to take action and no longer be passive about these threats,” said Rick Tumlinson, chairman of Deep Space Industries. 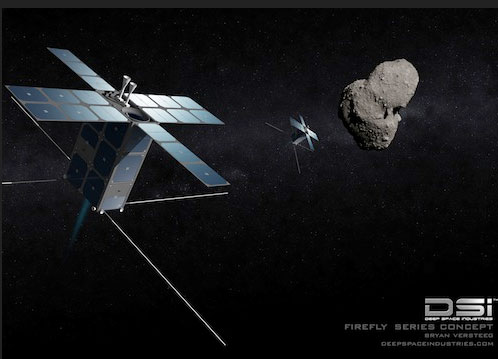 Not all asteroids are the same, and to be ready to deflect one that’s on a dangerous trajectory the world needs to know more about their structure and composition.  Many may be solid but all photos so far have shown gravel and rock piles. A defense plan assuming the wrong type could make matters worse.

“Placing ten of our small FireFly spacecraft into position to intercept close encounters would take four years and less than $100 million,” said David Gump, CEO of Deep Space Industries. “This will help the world develop the understanding needed to block later threats.”

There are estimated to be more than 10,000 near Earth asteroids that could destroy a major city and a hundred that would end civilization.  Near Earth asteroids are confirmed at a rate of more than 900 per year, but as yet little is known about their composition and structure.

“Observations by space telescopes like the Sentinel planned by the B612 Foundation and the smaller units offered by Planetary Resources should be supported," Tumlinson said. "Astronomical observations are a good first step but at Deep Space we believe we need get up close and personal.  Then when these objects are identified, we can launch one or more FireFlies to intercept them, and give us close-up images so that we understand what we are dealing with."

Deep Space Industries is preparing the FireFly series to begin prospecting in 2015 for asteroids that are very small, five to seven meters in diameter.  The same FireFly prospecting design would be used in the sentry line of asteroid interceptors.

Then in 2020, Deep Space will bring one of these tiny rocks back to a parking orbit near Earth to be harvested for its water, rocket fuel, and metals for in-space customers such as communications satellites that have run out of gas.  The larger harvesting spacecraft might be the basis for interceptors that could nudge larger threats into trajectories that miss Earth.

In the coming months Deep Space Industries will be offering plans to develop a coordinated low-cost commercial solution to setting up humanity’s first line of defense against asteroid threats.

"While our primary mission is the harvesting of asteroid resources, we believe that virtually the same effort and technology can be applied to removing this threat to our precious planet," Tumlinson said.