Arianespace... A Meeting Of Soyuz Minds... 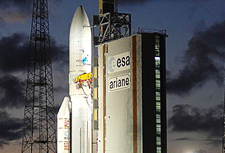 The Soyuz Consultation Committee, comprising representatives of the Russian space agency Roscosmos, the European Space Agency (ESA), the French space agency CNES and Arianespace, met on Tuesday, May 11, in French Guiana. Confirmation was received by SatNews that the inaugural launch of Soyuz from the Guiana Space Center would take place during the fourth quarter of 2010.

The meeting was called to take note of actual work progress on the Soyuz launch pad at the Guiana Space Center, and to approve the overall timetable for assembly and testing leading up to the inaugural launch. Nearly all Russian and European systems are now undergoing qualification. The first Soyuz launcher to lift off from the Guiana Space Center is already assembled in the Preparation and Testing Building.

The meeting of the Soyuz Consultative Committee was co-chaired by Anatoli Perminov, Director of Roscosmos, Jean-Jacques Dordain, Director-General of ESA, Yannick d’Escatha, President of CNES, and Jean-Yves Le Gall, Chairman and CEO of Arianespace. Also participating in the meeting were the heads of the ESA Launcher Directorate, the Guiana Space Center, the CNES Launcher Directorate, the Samara TsSKB-Progress space center (prime contractor for the Soyuz launch system), NPO-Lavotchkine (prime contractor for the Fregat upper stage) and TsENKI (prime contractor for ground infrastructures). With Ariane 5, Soyuz and Vega all deployed from the Guiana Space Centre, Europe will offer a complete range of launch vehicles, enabling it to meet the full range of requirements for all Arianespace customers.