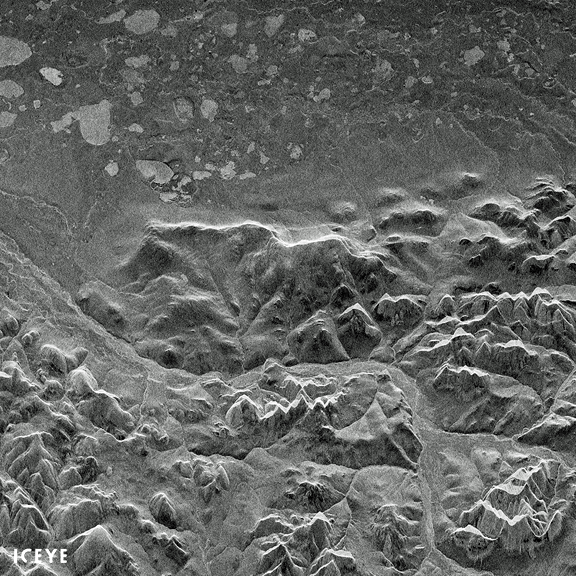 The first image capture by the ICEYE-X1 SAR satellite.

Image is courtesy of ICEYE.

ICEYE-X1 is the world’s first SAR satellite under 100 kg., launched less than a week ago on January 12, 2018, on ISRO’s PSLV-C40 from Satish Dhawan Space Center in India.

A synthetic-aperture radar (SAR) instrument sends its own radio waves to the ground, creating an image from the energy that scatters back to the instrument. Given this, SAR sensors can provide imaging of the Earth during both day and night, regardless of cloud cover and weather condition. Conventional SAR satellites typically weigh in excess of 1,000 kg. due to the amount of instrumentation on board. ICEYE-X1 is the company’s first satellite mission. Both the satellite bus and the SAR instrument were developed and integrated by ICEYE. ICEYE-X1 is a significant shift in size from traditional SAR satellites, allowing the technology to be condensed into a satellite weighing under 100 kg. This in turn enables launching a constellation of many satellites rather than only a few.

The full image transmitted to the ground from ICEYE-X1 exceeded 1.2 GB of raw data and spans an area of roughly 80x40 km on the ground. ICEYE-X1 obtained the image in the span of ten seconds, traveling at a speed of more than 7.5 km/s and at an altitude exceeding 500 km. Matching what ICEYE simulated prior to the launch, the final data resolution from the first satellite reaches 10x10 meters.

ICEYE-X1 has been successfully communicating with the ground since 05:20 UTC, January 12th, using both S- and X-band for transmission. Telemetry data exchanged with the satellite in the first 100 orbits has already reached more than 1GB, surpassing a critical milestone for the mission.

Rafal Modrzewski, CEO and co-founder of ICEYE, said that with this single image, the ICEYE-X1 mission is already a full success regarding the firm's most important goals, but this is just the beginning. The company is now working to increase the range of incidence angles and to more than double the ground resolution for ICEYE-X2. with the next mission launching as soon as this summer.

Pekka Laurila, CFO and co-founder of ICEYE, added that after the initial SAR instrument calibration is finished, the company will start operational pilot imaging services for the firm's first customers.