ULA All the Way! Successful Launch Moon Missions for NASA 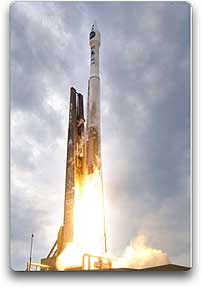 “ULA is extremely proud to be a part of NASA’s LRO mission team that will demonstrate new technology, survey lunar resources and environments, and support American astronauts once again landing on the moon,” said Mark Wilkins, ULA Vice President, Atlas Product Line.  “Our Atlas vehicles stretch back to the beginning of the space race and the United States’ first human space program, Mercury. We wish our NASA partners total success in the months ahead in completing this exciting exploration mission for our nation.”

The Atlas V’s upper stage, known as Centaur, is playing an unusual role in the LCROSS mission.  The LCROSS mission objective is to confirm the presence or absence of water ice in a permanently shadowed crater near a lunar pole. Following a unique role reversal after launch, the expended Centaur will become LCROSS’s payload.  After five days of flight, both will enter into an elongated lunar orbit where LCROSS will eventually separate from Centaur. Then in the October timeframe, Centaur will crash into the crater near the lunar pole, creating a plume of debris rising above the surface.  Four minutes later, LCROSS will fly through the plume, collecting and relaying information back to Earth before impacting the moon itself.

“In the 1960s, the Centaur was the first upper stage vehicle ever built with the lifting power to reach the moon and was specifically developed for lunar and planetary surveying,” said Vernon Thorp, ULA NASA Program Manager. “Centaur was used to help scout the first Apollo landing sites. Using it now to find water allowing astronauts to work on the moon for long periods of time in the future is adding another significant chapter to the Centaur’s history of supporting NASA’s human spaceflight program.”

The LRO/LCROSS mission was launched aboard an Atlas V 401 configuration and it used a single common core booster powered by the RD-180 engine. Atlas V has 15 previous successful launches including two missions for NASA, six for the Department of Defense and seven for commercial customers.

ULA’s next launch is the NASA/NOAA Geostationary Operational Environmental Satellite-O mission, which will be launched aboard a Delta IV rocket on behalf of Boeing Launch Services.  The launch is scheduled for June 26, 6:14 p.m. EDT, from Space Launch Complex-37 here.