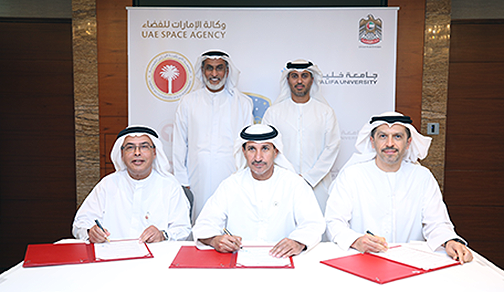 The cubesat project will see undergraduate students design and construct the MeznSat before using it to collect and analyze data on carbon dioxide and methane levels around the UAE. The project seeks to realize the Space Agency’s strategic goals of capacity development, promoting scientific research and coordinating national space sector activities.

MeznSat will be developed by undergraduates at AURAK, who will avail themselves of the world-class facilities available at Masdar Institute. The satellite is to be launched in late 2019 from a site in Japan, in coordination with the Japan Aerospace Exploration Agency (JAXA). Once in orbit, the team of students will then monitor, process and analyze the data from a ground station in the UAE. The processes and expertise involved in monitoring the atmosphere are similar to those employed during conventional Earth Observation programs. The project will support Emirati youth in developing the skill sets necessary for the UAE’s ambitious National Space Program and its future projects.

Using a visible camera as well as a shortwave infrared spectrometer, the CubeSat will measure the abundance and distribution of methane and carbon dioxide in the atmosphere. The satellite will also provide valuable insight into the concentration of nutrients in the coastal waters of the Arabian Gulf, which will allow for more accurate predictions of algal blooms and supports the timely implementation of relevant precautionary measures.

The project meets objectives laid out in the Space Agency’s Science, Technology and Innovation Roadmap, particularly those related to developing earth science research capabilities. Similarly, in providing insight into the effects of carbon dioxide and methane emissions on the environment, the team of university students will produce valuable scientific data for analysis.

CubeSats such as the MeznSat offer distinct advantages for developing relevant skill sets among students and early career professionals in the space sector, providing an accessible educational platform for satellite engineering and management. Generally weighing a little more than 1 kilogram, the satellites can be launched as additional payloads aboard third-party launches for relatively low costs.

H.E. Dr. Ahmad Belhoul Al Falasi, Minister of State for Higher Education and Advanced Skills and Chairman of the UAE Space Agency, said that collaborating with higher education institutions throughout the country, and enabling their access to cutting-edge space technology, forms a part of the UAE Space Agency’s core mandate. These efforts are part of the agency's mission and vision to establish the national space sector as a leading force for space exploration and use, both in the region and beyond. This project will provide tangible experiences and results that will have a direct impact on our future space sector leaders and pioneers. The agency works to encourage Emirati youth to engage with advanced STEM fields, and to facilitate their higher education pursuits, will be central to succeeding in our short-, mid- and long-term goals.

He added: “Working with higher education institutions such as Masdar Institute and the American University of Ras Al Khaima is one of our top priorities during this vital period for the local space sector. In collaboration with key space sector stakeholders, the Space Agency has made significant progress over the past three years, and we look forward to continuing our monumental efforts throughout the future.”

H.E. Dr. Mohammed Al Ahbabi, Director General of the UAE Space Agency, also emphasised the strategic objectives fulfilled through the collaborative program. “A major aspect of our federal mandate at the Space Agency is to coordinate with academic institutions and space sector stakeholders. This project is a great example of the ways in which we organize collective efforts towards shared goals, and apply our national resources to developing our space sector capabilities.”

Professor Hassan Hamdan Al Alkim of the American University of Ras Al Khaima welcomed the agreement and said that his cooperation with the UAE Space Agency represents a significant opportunity for mutual benefit, which will ultimately strengthen the nation's national space sector. Furthermore, embarking on a project with such a prestigious entity underlines the quality of the research going on at AURAK, through the Ras Al Khaimah Research and Innovation Center, as well as the ICT Center for Teaching and Creativity in Informatics Communication and Networking.