[Satnews] The past 18 months have brought forth some of the most sweeping changes the satellite telecom industry has ever seen.

Known for years as an insulated industry that grew at GDP-like growth rates, we have recently seen completely new words and concepts enter our lexicon and consciousness—unicorns, LEO-HTS constellations, rounds of funding in the hundreds of millions of dollars despite no proven revenue generation whatsoever. This has led to whispers of pricing pressures, increased competition, and new applications being unlocked as orders of magnitude more capacity are put into orbit.

SES Overtakes Intelsat in Top-Line Revenues….Temporarily
Full-year 2014 financials saw some degree of shake-up among operators, with currency exchange rates and varying degrees of exposure to contracting markets such as Gov/Mil causing some movement among top operators. Notable, SES overtook Intelsat in terms of top-line revenues in 2014, with the former’s revenues of $2.562 billion besting the latter’s $2.472 billion. The two operators traded places again in H1 2015, with Euro depreciation negatively impacting SES’s dollar-denominated revenues, which fell to just under $1.1 billion, well behind Intelsat’s $1.2 billion. The two operators have in recent years been on different trajectories, with Intelsat hurting from exposure to US Government clients, and SES weathering this storm more effectively due to a somewhat less US-centric customer base. 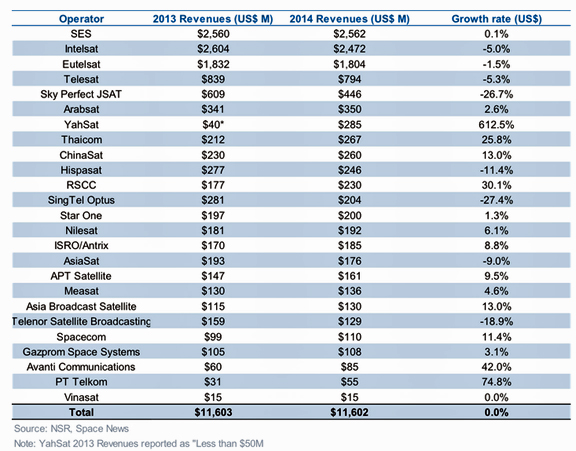 Other operators reporting swings in revenues included Sky Perfect JSAT, which saw a 15 percent drop in Yen-denominated revenues correspond to a 26.7 percent drop in dollar-denominated revenues, due to a weakening Yen, which has more likely than not bottomed out vis-à-vis the USD. YahSat, Thaicom, and Avanti—all of whom rely on GEO-HTS payloads for a significant percentage of revenues—saw healthy revenue growth across the board. This lends further credence to the idea that GEO-HTS will propel future industry growth. Overall, the industry saw flat revenues in 2014, with total revenues from the top 25 FSS operators remaining around $11.6 billion.

Annual Revenues per Transponder Declined….Significantly
Annual revenues per leased FSS transponder among the 22 operators tracked in this metric declined from $2.05M to $1.94M during the past year, with pricing pressures coming to fruition through a combination of aforementioned currency exchange rate fluctuations (for example, JSAT’s metric fell from $4.8M to $3.4M, partially due to Yen depreciation) and lower pricing in general. That said, the question of “will GEO-HTS grow the pie as much as it shrinks the cost per slice?” has thus far yielded an answer of yes, with the industry again having seen more or less flat revenue growth in a year that saw shorter-term macroeconomic headwinds, such as reduced government spending. 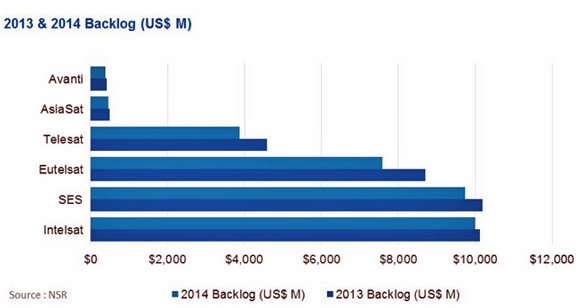 Only six operators report backlog figures, but in 2014, all six of them saw backlog decline. These six operators—the Big Four, AsiaSat, and Avanti—saw collective backlog decline from $34.5 billion to $32.0 billion, indicating a wider transformation of business models in the industry. Specifically, as a smaller percentage of operator revenues comes from video, and a larger percentage comes from data, average contract lengths will decline, thus leading to less backlog overall. Some operators will undoubtedly find this being a major issue, with increased revenue volatility making it more difficult to raise capital and much more difficult to pull the trigger on CAPEX decisions in the hundreds of millions of dollars. Put another way, it’s a lot more difficult to justify launching a $250M satellite when there is no anchor client, and as the era of GEO-HTS systems continues to dawn, the time of 15-year DTH anchor clients is running out.

Bottom Line
Lower government spending, increased volatility and mounting price pressure, among others, form the competitive landscape satellite operators are navigating in today and will continue to traverse over the short-to-medium term.  In a business that requires a 15-year horizon or a 15-year bet, short-to-medium term challenges will dictate the strategic direction of individual players in adjusting to the shifting course of the marketplace.

This is what NSR sees…
The increased proliferation of GEO-HTS payloads has laid the groundwork for some fundamental changes to the satellite telecommunications industry and the business models therein. Some operators have been able to capitalize on first-mover advantages, while others will undeniably take a “wait and see” approach that will put them at a disadvantage should the market continue to evolve in ways that favor GEO-HTS business models over the traditional paradigm, including more growth coming from data applications rather than video. The latter camp of operators is becoming increasingly isolated, with the latest operator to switch sides on the GEO-HTS debate being APT Satellite, which recently reversed years of “wait and see” with a more proactive approach to GEO-HTS.

Overall, it is expected that moving forward, operators will need to make up for a fall in prices by leasing significantly more capacity, which will become feasible through a continued preference for GEO-HTS systems. Traditional FSS will remain relevant for point-to-multipoint communications (i.e., DTH), but overall there remains limited reason for a new data-type customer to choose FSS over GEO-HTS in many, but not all, instances.

In our next finance-oriented Bottom Line, NSR will examine the impact of LEO-HTS constellations in the industry, with emphasis on the impact of potential cannibalization and continued pricing pressures due to excess capacity. And here, business models will play a key role when all signs lead to commoditization of capacity as satellite operators will be faced with an onslaught of cheap bits flooding the marketplace, all looking for that elusive “killer app.”