The GSAT-6A Heads to Orbit, Launched by an Indian GSLV Rocket

An Indian GSLV rocket has pushed a GSAT-6A communication satellite into orbit.

The rocket, carrying the country's communications satellite GSAT-6A, lifted off from the spaceport here today. 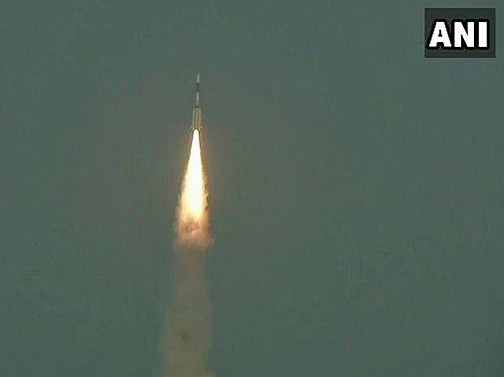 The GSLV-F08 launch, carrying the GSAT-6A satellite.
Photo is courtesy of ANI.

The GSLV-F08 rocket and the passenger satellite blasted off at 4:56 p.m. from the second launch pad at India's Sriharikota launch site. The 49.1 meter tall GSLV carried the 2,140 kg. GSAT-6A satellite to a geostationary orbit at a height of about 36,000 km.

According to ISRO, two improvements — induction of high thrust Vikas engine and an electromechanical actuation system — have been incorporated into the rocket's second stage for this launch.The ISRO said that the GSAT-6A was similar to the GSAT-6 and will provide a platform for developing technologies, such as demonstration of 6 meter, S-band, unfurlable antenna, handheld ground terminals and network management techniques. These are useful for satellite-based mobile communication applications.

ISRO Chairman K.Sivan stated that the GSAT-6A would be followed by the launch of navigation satellite within the next fiscal year.