[SatNews] Payload integration for Arianespace's upcoming Soyuz mission is nearly complete, as the dispenser with its six Globalstar satellites has been installed on the launcher's Fregat upper stage at Baikonur Cosmodrome. 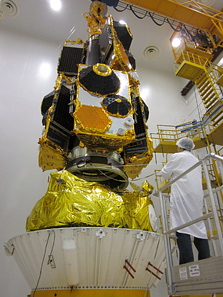 The dispenser with its six Globalstar second-generation satellites is installed atop Soyuz’ Fregat upper stage during integration activity at Baikonur Cosmodrome. Photo courtesy of Arianespace.
The October 19th flight will be performed for Arianespace by its Starsem affiliate, and the integration of the dispenser with its satellite cluster on Fregat was completed yesterday in Starsem's Upper Composite Integration Facility (UCIF) located at Baikonur Cosmodrome's Site 112 facility. This step clears the way for the dispenser's encapsulation in the Soyuz ST payload fairing, which is planned for the weekend. 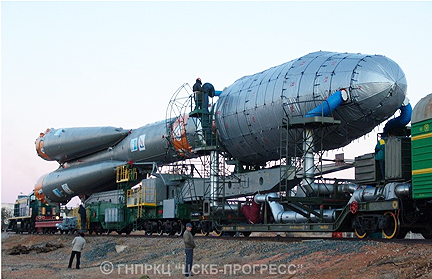 Soyuz 2 launch vehicle
Arianespace has been contracted to perform four Soyuz launches carrying six satellites each, further building Globalstar's constellation with these 24 2G spacecraft. Their deployment will secure the company's space segment beyond 2025, ensuring continuity for its mobile satellite voice and data services provided to businesses, governments and consumers. Globalstar's new satellites will have a liftoff mass of approximately 700 kg. each, and are fitted with 16 transponders from C- to S-band, along with 16 receivers from L- to C-band. Arianespace's Globalstar missions will use the Soyuz 2 evolved version of Russia's venerable medium-lift workhorse launcher, which incorporates the enlarged ST payload fairing and an updated digital flight control system. Soyuz 2 is the same vehicle that Arianespace will use at the Spaceport in French Guiana, operating side-by-side with its heavyweight Ariane 5 and Vega lightweight launchers.

These four new missions follow eight flights performed by Starsem from 1999 to 2007 using an earlier Soyuz version to orbit a total of 32 1G Globalstar spacecraft. Each of those launches orbited four of the 450-kg. satellites.