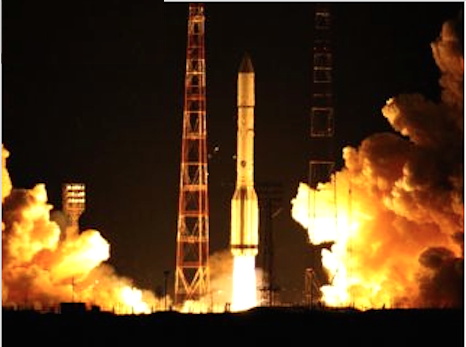 After the establishment of the third stage of the launch vehicle orbital unit consisting of Briz-m spacecraft Yamal-401 "autonomous flight continues."

Further down the spacecraft failed to reach orbit due to the propulsion system of the booster.

This is the seventh year 2014 launch space by using the carrier rocket proton and 400 5th start in its aviation history.

The Proton vehicle has a deep heritage, with this latest mission marking 400 launches since its inception in 1965.

The Proton’s lead designer was Vladimir Chelomei, who designed it with the intention of creating both a powerful rocket for military payloads and a high-performance ICBM. The program was changed, and the rocket was developed exclusively for launching spacecraft.

First named UR-500, but adopted the name “Proton”, which also was the name of the first three payloads launched. Proton’s history includes interplanetary missions to the Moon, Venus, Mars, and Halley’s Comet.

It also launched the Salyut space stations, the Mir core segment and both the Zarya (Dawn) and Zvezda (Star) modules for the current International Space Station.

It is built by Khrunichev Research and State Production Center, one of the pillars of the global space industry and the majority owner of ILS.