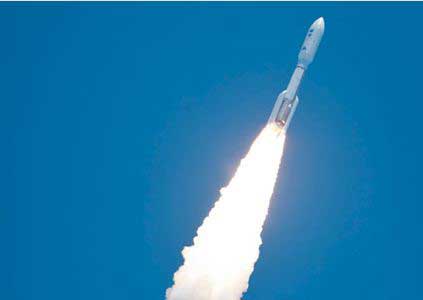 JPL manages the Juno mission for principal investigator Scott Bolton. The Juno mission is part of the New Frontiers Program managed at NASA's Marshall Space Flight Center in Huntsville, Alabama. Lockheed Martin Space Systems of Denver built the spacecraft. Launch management for the mission is the responsibility of NASA's Launch Services Program at the agency's Kennedy Space Center in Florida. JPL is a division of the California Institute of Technology in Pasadena.

Following launch on an Atlas V 551 and a five-year cruise in space, Juno will improve the understanding of the solar system’s beginnings by revealing the origin and evolution of its largest planet, Jupiter.

Juno is the second of five critical missions ULA is scheduled to launch for NASA in 2011. These missions will address important questions of science — ranging from climate and weather on planet Earth to life on other planets and the origins of the solar system.

This team is focused on attaining Perfect Product Delivery for the Juno mission, which includes a relentless focus on mission success (the perfect product) and also excellence and continuous improvement in meeting all of the needs of our customers (the perfect delivery). 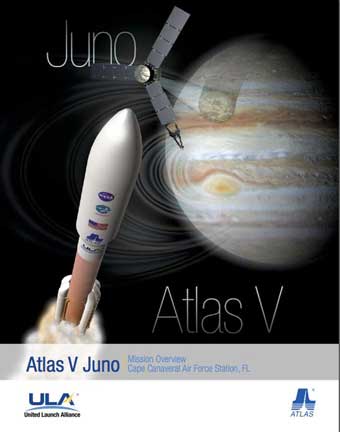 Weather Forecast
Tropical Storm Emily has formed and is approximately 1200 nautical miles Southeast of CCAFS.  There is considerable uncertainty with the forecast track and intensity in the latter half of the period.  With the current forecast track and intensity, deteriorating conditions over the Spaceport are expected through the day Saturday with strengthening ground winds. 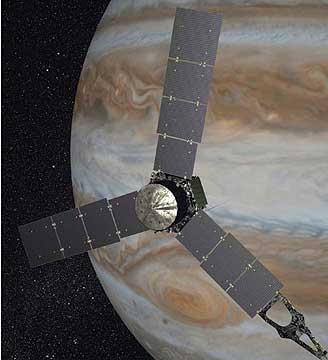 Image Courtesy of Lockheed Martin
JUNO SPACECRAFT | Overview
The Juno spacecraft will provide the most detailed observations to date of Jupiter, the solar system’s largest planet. Additionally, as Jupiter was most likely the first planet to form, Juno’s findings will shed light on the history and evolution of the entire solar system.

Following a five-year long cruise to Jupiter, which will include a gravity-assisting Earth fly-by, Juno will enter into a polar orbit around the planet, completing 33 orbits during its science phase before being commanded to enter Jupiter’s atmosphere for mission completion. In its highly elliptical 11-day orbits, Juno will come within 3,100 miles of Jupiter’s cloud tops while measuring magnetic and gravity fields, atmospheric composition and performing infrared, ultra- violet and visible light photography.

The Juno spacecraft is unique in several ways. It is the first solar-powered, versus nuclear, spacecraft to perform operations this far from the Sun. To accomplish this, Juno is equipped with three very large solar panels, which when extended, give the spacecraft a diameter of 66 feet.

To combat its exposure to radiation during its year orbiting Jupiter, most of Juno’s electron- ics have been housed inside a titanium vault in the center of the spacecraft. Juno will also be spin-stabilized throughout its mission in order to maximize scientific observations.

NASA’s Jet Propulsion Laboratory, Pasadena, California, manages the Juno mission for principal investigator, Scott Bolton of the Southwest Research Institute in San Antonio, Texas. JPL is a division of the California Institute of Technology in Pasadena. The Juno mission is part of the New Frontiers Program managed at NASA’s Marshall Space Flight Center in Huntsville, Alabama. Lockheed Martin Space Systems in Denver, Colorado, built the spacecraft. Launch management is the responsibility of NASA’s Launch Services Program at the Kennedy Space Center in Florida. 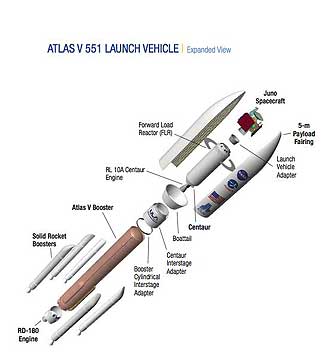 The Atlas V booster is 12.5 ft in diameter and 106.5 ft in length. The booster’s tanks are structurally rigid and constructed of isogrid aluminum barrels, spun-formed aluminum domes, and intertank skirts. Atlas booster propulsion is provided by the RD-180 engine system (a single engine with two thrust chambers). The RD-180 burns RP-1 (Rocket Propellant-1 or highly purified kerosene) and liquid oxygen, and it delivers 860,200 lb of thrust at sea level. The Atlas V booster is controlled by the Centaur avionics system, which provides guidance, flight control, and vehicle sequencing functions during the booster and Centaur phases of flight.

The SRBs are approximately 61 in. in diameter, 67 ft in length, and constructed of a graphite-epoxy composite with the throttle profile designed into the propellant grain. The SRBs are jettisoned by structural thrusters following a 92-second burn.

The Centaur upper stage is 10 ft in diameter and 41.5 ft in length. Its propellant tanks are constructed of pressure-stabilized, corrosion resistant stainless steel. Centaur is a liquid hydrogen/ liquid oxygen- (cryogenic-) fueled vehicle. It uses a single RL10A-4-2 engine producing 22,300 lb of thrust. The cryogenic tanks are insulated with a combination of helium-purged insulation blankets, radiation shields, and closed-cell polyvinyl chloride (PVC) insulation. The Centaur forward adapter (CFA) provides the structural mountings for vehicle electronics and the structural and electronic interfaces with the spacecraft.

The Juno spacecraft is encapsulated in the Atlas V 5-meter diameter short PLF. The 5-meter PLF is a sandwich composite structure made with a vented aluminum-honeycomb core and graphite-epoxy face sheets. The bisector (two-piece shell) PLF encapsulates both the Centaur and the spacecraft, which separates using a debris-free pyrotechnic actuating system. Payload clearance and vehicle structural stability are enhanced by the all-aluminum forward load reactor (FLR), which centers the PLF around the Centaur upper stage and shares payload shear loading. The vehicle’s height with the 5-m short PLF is approximately 197 ft.