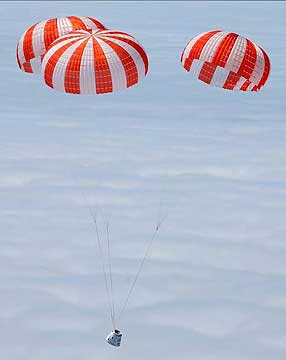 [SatNews] Commercial launch spacecraft have always traveled in a one-way direction. That is until today when the FAA made SpaceX the first-ever commercial company to receive a license to re-enter a spacecraft from orbit. Not since the Federal Aviation Administration (FAA) Office of Commercial Space Transportation was created in 1984, and having issued licenses for more than 200 launches has any company been granted the right to return.

Next month, SpaceX is planning to launch its Dragon spacecraft into low-Earth orbit atop a Falcon 9 rocket.  The Dragon capsule is expected to orbit the Earth at speeds greater than 17,000 miles per hour, reenter the Earth’s atmosphere, and land in the Pacific Ocean a few hours later.

This will be the first attempt by a commercial company to recover a spacecraft reentering from low-Earth orbit.  It is a feat performed by only six nations or governmental agencies: the United States, Russia, China, Japan, India, and the European Space Agency.

It is also the first flight under NASA’s Commercial Orbital Transportation Services program to develop commercial supply services to the International Space Station and encourage the growth of the commercial space industry.  After the Space Shuttle retires, SpaceX will make at least 12 flights to carry cargo to and from the International Space Station as part of a Commercial Resupply Services contract for NASA.  The Falcon 9 rocket and Dragon spacecraft were designed to one day carry astronauts; both the COTS and CRS missions will yield valuable flight experience towards this goal.

The license is valid for one year from the date of issue.