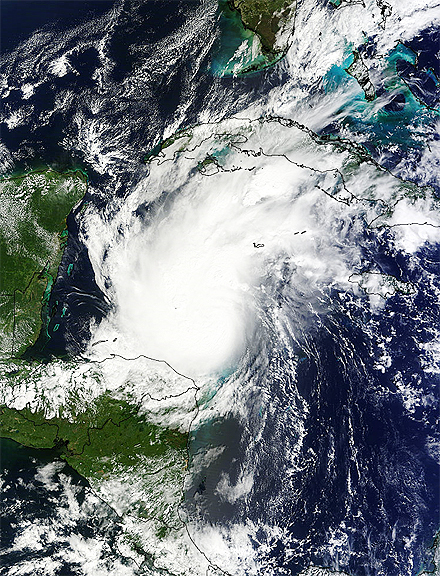 This visible image of Hurricane Rina was taken by the MODIS instrument on NASA's Terra satellite on Oct. 24, 2011 at 12:15 p.m. EDT (16:15 UTC) when it was off the coast of Mexico. The strongest thunderstorms around the center are casting shadows on the surrounding lower clouds. Rina's southwestern edge was over Honduras at this time. Credit: NASA Goddard MODIS Rapid Response Team
[SatNews] Hurricane warnings are in effect in Mexico's Yucatan Peninsula and visible and infrared satellite imagery from NASA continues to show Hurricane Rina getting stronger.

Rina is now a category 2 hurricane on the Saffir-Simpson hurricane scale. The Mexican government issued a hurricane warning for the east coast of the Yucatan Peninsula from north of Punta Gruesa to Cancun. From Chetumal to Punta Gruesa a tropical storm warning is in effect. As NASA's Terra satellite passed over Hurricane Rina on October 24 at 12:15 p.m. EDT (16:15 UTC) the Moderate Resolution Imaging Spectroradiometer (MODIS) instrument took a visible image of the storm as it nears the Yucatan. The strongest thunderstorms around the center are casting shadows on the surrounding lower clouds. Rina's southwestern edge was over Honduras at this time.

On October 25, when NASA's Aqua satellite passed overhead, it collected valuable data about Rina's cloud top temperatures. High, cold cloud top temperatures indicate a lot of power in the storm, as strong uplift pushes cloud tops higher in the troposphere, where temperatures drop. The higher and colder the thunderstorms within a hurricane, the stronger they are, and the heavier the rainfall within.

Infrared imagery is color coded at NASA. It is created at the NASA Jet Propulsion Laboratory in Pasadena, Calif. In the image from earlier today, the strongest, coldest, highest cloud tops that surrounded the center of Rina (the eye) were colder than -63 Fahrenheit (-52 Celsius). The eye showed warmer temperatures, indicating that it may be seen on visible satellite data.

On October 25 at 11 a.m. EDT, Rina continues to strengthen, as is evident from the AIRS infrared imagery showing powerful convection surrounding the eye of the storm. Rina's maximum sustained winds are now up to 105 mph (165 kmh). Hurricane Rina is closing in on Mexico's Yucatan Peninsula. It is now centered near 17.4 North and 83.9 West, about 300 miles (480 km) east-southeast of Chetumal, Mexico and 305 miles (490 km) southeast of Tulum, Mexico. That's not too far away when you consider that the tropical storm-force winds extend out 115 miles (185 km) from the center. The hurricane-force winds, however are confined to a much smaller area at this time- outward 15 miles (30 km) from the center. 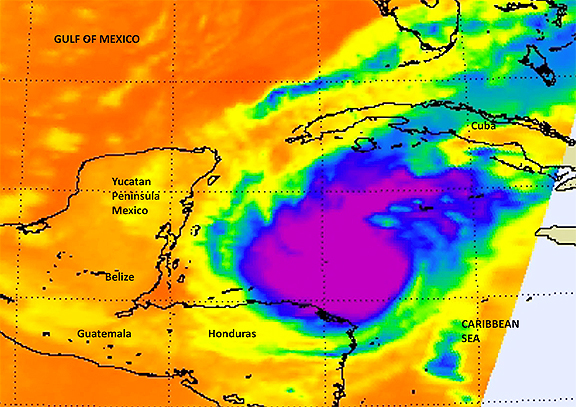 On October 25, when NASA's Aqua satellite passed overhead it collected valuable data about Rina's cloud top temperatures. It showed a large area of strong thunderstorms (purple) completely surrounding the center of circulation. The strongest, coldest, highest cloud tops that surrounded the center of Rina (the eye) were colder than -63 Fahrenheit. The eye (blue surrounded by purple) showed warmer temperatures, indicating that it may be seen on visible satellite data. Credit: NASA JPL, Ed Olsen
The National Hurricane Center (NHC) noted that Rina is crawling to the west-northwest near 3 mph (6 kmh) and is expected to turn to the northwest and speed up a little over the next two days. Rina's center is expected to approach the Mexican coastline in the hurricane warning area by Wednesday night or early Thursday. Tropical storm-force winds are expected in the warning area tomorrow (Oct. 26) afternoon, followed by hurricane-strength winds. Heavy rainfall as seen in NASA AIRS infrared imagery is going to accompany those winds. The NHC is expecting Rina to produce between 8 and 16 inches of rainfall over the eastern Yucatan late Wednesday and early Thursday, as dangerous storm surge hits coastal areas. Storm surge is expected to be as much as 5 to 7 feet above normal tide levels near the track of the storm's center and right of center. NASA AIRS infrared data also shows that Rina is in an area of very warm ocean temperatures, over the 80 degree Fahrenheit (26.6 C) minimum to maintain a tropical cyclone, which will help Rina strengthen over the next day or two.