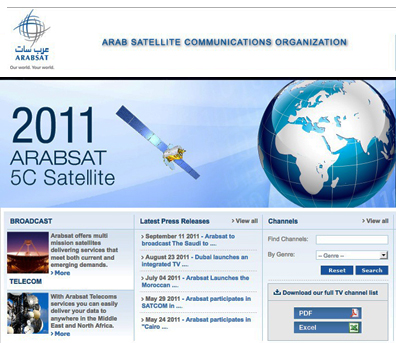 Arabsat homepage
[SatNews] This new endeavor will bring this special sports content to new viewers as part of an Arab Bouquet...

Arab Satellite Communications Organization (Arabsat) has announced in Riyadh that all necessary technical and logistics requirements for the global distribution of the Saudi League matches in Europe and the United States have been finalized. This was announced by the Company's President & CEO, Eng./ Khalid bin Ahmed Balkheyour. Arabsat has recently signed agreements to distribute the Saudi League matches on the European satellite HOT BIRD. A dedicated TV channel has been assigned to allow the Saudi community in Europe and all of those interested in the famous Saudi League, to receive the signal. This channel will be supporting the broadcast of the six newly launched sports channels on Arabsat satellite Badr 4, which covers large parts of Europe and can be received by small dishes.

Arabsat has also made the necessary arrangements to distribute the Saudi League matches in the United States via Dish Network through satellites and also via IPTV system across the same network as a part of the unique Arab Bouquet that includes a variety of the best Arabic channels. It is also worth mentioning that Arabsat will begin this week a huge advertising campaign in various mass media instruments to publicize the Saudi League broadcasting information. Arabsat made all these arrangements via an agreement with the Saudi Ministry of Culture and Information agreement to distribute the Saudi League globally as well as as part of a previous contract to launch the HD and SD Saudi sports bouquet on the Arabsat Badr satellites, which includes six HD Channels and six SD that blanket the entire Arab world as well as large sections of Europe.