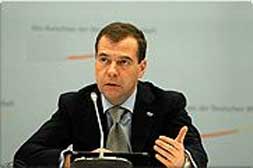 As part of these agreements, Gilat will supply network equipment and Ka-band end-user terminals for RTComm's future constellation of multi spot-beam satellites. The cooperation between the parties includes transfer of technology required for local manufacture in Russia, and R&D cooperation. As part of a frame MOU, the parties signed two specific agreements which will go into implementation this year.

Today's announcement showcases the President and the Government's ongoing commitment to bridging the digital divide across the Russian Federation. Supported by Gilat's capabilities and track-record for success, this high priority project will ensure that high-speed broadband access is delivered to consumers and businesses across our vast nation, ensuring even the most remote locations can become active participants in the digital society," said Naum Marder, the Deputy Minister of Telecommunications and Mass Communications of the Russian Federation.

Rostelecom has the largest domestic backbone network and last mile connections in Russia. With licenses to provide a wide range of telecommunication services to residential, corporate and governmental subscribers and third party operators across all regions of the Russian Federation, the Group has announced consolidated revenues of RUB 275.7 billion in 2010.

"The realization of the project is utmost important for Rostelecom Group in the view of the government and commercial challenges for the company. In particular, the project involves the advanced communications services for remote regions of Russia and access to e-government services," said Oleg Rumiantsev, Director of External Communication Department of Rostelecom.

RTComm is one of the leading telecommunication companies in Russia and already operates Ku-band satellite networks. The use of Gilat's Ka-band equipment will allow RTComm to offer an advanced broadband connectivity service to consumers, as well as to SME's, enterprises and government agencies across the Russian Federation. The launch of Ka-band high-throughput multi-spot beam satellites, part of which are RTComm's, is scheduled for 2012-2014, and is planned to support over two million subscribers.

"We chose Gilat as the best partner for bringing Ka-band to Russia — both in terms of technology and as a long-term partner. We rigorously evaluated a number of satellite broadband solutions, and we are confident that the technological level of Gilat's solution, as well as positive experience of Ku-band projects implementation, will enable fast and effective roll-out of this nationwide project approved by the Government of the Russian Federation," said Valeriy Lokhin, RTComm's General Manager.

NIIR FSUE is the leading system-level research institute of the Ministry for Telecommunications and Mass Communications of the Russian Federation. As part of the agreement, Gilat will provide NIIR with manufacturing rights, know-how and marketing rights for the Ka-band gateways which NIIR will adapt to Russian market requirements.

"Gilat's cutting-edge technology opens new opportunities for the Russian market. NIIR's experience in system-level integration and development, as well as in the manufacturing of various equipment for satellite networks, coupled with Gilat's technology, will enable making the first Ka-band project in the Russian Federation a success," said Valery Butenko, NIIR's General Manager.

"This is an important award for Gilat, reinforcing our position in the Ka-band marketplace. We see Ka-band technology expanding to more regions in the world, and offering new opportunities with much higher capacities and at lower prices to the subscribers," said Amiram Levinberg, Gilat's Chairman of the Board and CEO.

"It is an honor for us to be part of this prestigious initiative which aims to bring high speed connectivity throughout the Russian Federation. RTComm is becoming one of the leading providers of satellite communications within Russia, and NIIR is a prominent design house with high technical expertise. We view this partnership as a clear vote of confidence in our technology and in Gilat in general," said Arie Rozichner, Gilat's RVP Eurasia.