UPDATE ULA's Atlas V And NASA’s Solar Dynamics Observatory — All Dressed Up And Nowhere To Go — Yet! 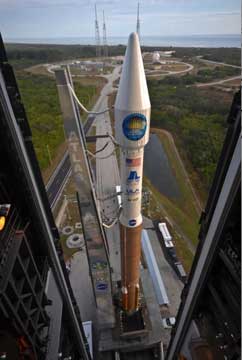 A United Launch Alliance with NASA’s Solar Dynamics Observatory satellite rolls out to its Space Launch Complex-41 launch pad arriving at 8:30 a.m. EST today. The launch of the SDO mission is set for Wednesday with a launch window of 10:26 – 11:26 a.m. EST. SDO is the first satellite of NASA’s Living with a Star (LWS) program. Its purpose is to examine the sun, the source of all space weather. Photos by Pat Corkery, United Launch Alliance.
Cape Canaveral AFS, Fla. (Feb. 10, 2010) - The launch attempt of the United Launch Alliance Atlas V with NASA’s Solar Dynamics Observatory (SDO) satellite was scrubbed today due to high ground winds violating launch weather criteria. The launch criteria for today’s North-Northwest wind direction called for wind speeds to not exceed 20 knots. During the 10:26-11:26 a.m. EST launch window, winds consistently exceeded the criteria. The Atlas V vehicle and SDO spacecraft are working on issues for launch and are safe and secure at this time. The launch is rescheduled for Thursday, Feb. 11, with a launch window of 10:23-11:23 a.m. EST. The launch will take NASA’s Solar Dynamics Observatory satellite to examine the sun and the various sources of space weather. 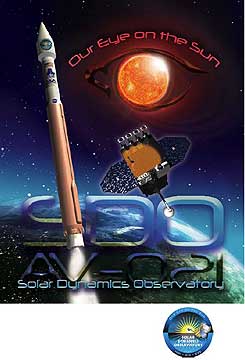 NASA TV will broadcast the launch live and a simulcast of the launch can be viewed on the ULA website at.

SDO will study the sun, which is still a great mystery to scientists. SDO will help us understand the sun’s energy production mechanisms, the interior workings of the sun, and the ways in which energy is stored and released in the sun’s atmosphere. Improved understanding of the sun and its function will enable better prediction and forecasting of space weather and earlier warnings to protect astronauts and satellites as they perform their missions. SDO will collect huge amounts of data, enough data to fill a single CD every 36 seconds. Because SDO has no on-board recording system, SDO will be placed in a geosynchronous orbit (GSO) such that it maintains a constant position directly above Earth’s equator that allows constant communication with its dedicated ground station in New Mexico. 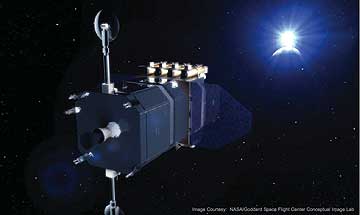 SDO carries instruments that allow it to measure the extreme-ultraviolet spectral irradiance of the sun at a rapid rate. Other SDO mission objectives include measuring doppler shifts in oscillation velocities over the entire visible disk, making high-resolution measurements of the longitudinal and vector magnetic field over the entire visible disk, making images of the chromosphere (the thin layer of the sun’s atmosphere just above its visible surface) and the inner corona (the outer layer of the sun's atmosphere) at several temperatures at a rapid rate, and making those measurements over an 11-year solar cycle to capture any solar variations.

The Helioseismic and Magnetic Imager (HMI) looks at billions of tiny ripples that resemble earthquake waves. HMI will measure the ripples and the magnetic field on the visible surface of the sun (the photosphere) using different colors (wavelengths). HMI will use color to measure the sun’s magnetic field. SDO investigators will attempt to use HMI’s data to model the activities inside the sun that produce the observed effects.

The Solar Dynamics Observatory (SDO) mission will be flown from Space Launch Complex 41 (SLC-41) at Cape Canaveral on an Atlas V 401 configuration vehicle (tail number AV-021) with a single-engine Centaur. The payload will be encapsulated in a 4-meter diameter large payload fairing (LPF) and integrated to the Centaur upper stage using a modified D1666 payload adapter (PLA), separation system, and electrical harness. The SDO mission will fly an easterly trajectory from SLC-41. The spacecraft separation event will release the SDO spacecraft into an inclined geosynchronous transfer orbit at a post-ascending node injection point. The spacecraft will then circularize its orbit using its own on-board propulsion system and begin its nominal 5-year mission to observe the sun. 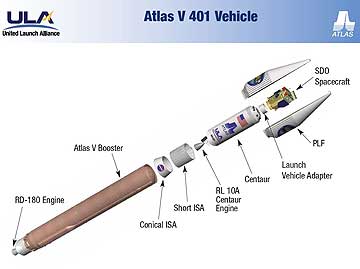 The Atlas V 401 configuration consists of a single Atlas V booster stage and the Centaur upper stage. The Atlas V booster and Centaur are connected by the conical and short interstage adapters (ISAs). The Atlas V booster is 12.5 ft in diameter and 106.5 ft long. The booster’s tanks are structurally rigid and constructed of isogrid aluminum barrels, spun-formed aluminum domes, and intertank skirts. Atlas booster propulsion is provided by the RD-180 engine system (a single engine with two thrust chambers). The RD-180 burns RP-1 (Rocket Propellant-1 or highly purified kerosene) and liquid oxygen, and delivers 860,200 lb of thrust at sea level. The Atlas V booster is controlled by the Centaur avionics system that provides guidance, flight control, and vehicle sequencing functions during the booster and Centaur phases of flight. The boost phase of flight ends 6 seconds after booster engine cutoff (BECO), when the separation charge attached to the forward ISA is fired and eight retrorockets push the spent Atlas booster stage away from the Centaur upper stage.

The Centaur upper stage is 10 ft in diameter and 41.5 ft long. Its propellant tanks are constructed of pressure-stabilized, corrosion resistant stainless steel. Centaur is a liquid hydrogen/liquid oxygen-(cryogenic) fueled vehicle. It uses a single RL10A-4-2 engine that produces 22,300 lb of thrust. The cryogenic tanks are insulated with a combination of helium-purged insulation blankets, radiation shields, and closed-cell polyvinyl chloride (PVC) insulation. The Centaur forward adapter (CFA) provides the structural mountings for vehicle electronics and the structural and electronic interfaces with the SC. The SDO mission uses the 4-m (14-ft) diameter large payload fairing (PLF). The PLF is a bisector (two-piece shell) fairing consisting of aluminum skin/stringer construction with vertical split-line longerons. The vehicle’s height with the PLF is approximately 189 ft.