President Donald J. Trump has signed the Space Policy Directive – 3 directing the United States to lead the management of traffic and mitigate the effects of debris in space. The Directive is shown below, as well as comments from Jim Bridenstine, NASA Administrator who said,

“NASA strongly supports the White House’s continued bold direction in forging a sustainable and focused space policy that strengthens American leadership. It was my honor today to represent the agency at the National Space Council, where the President announced Space Policy Directive-3 – which will guide critical and much-needed progress for space traffic management. 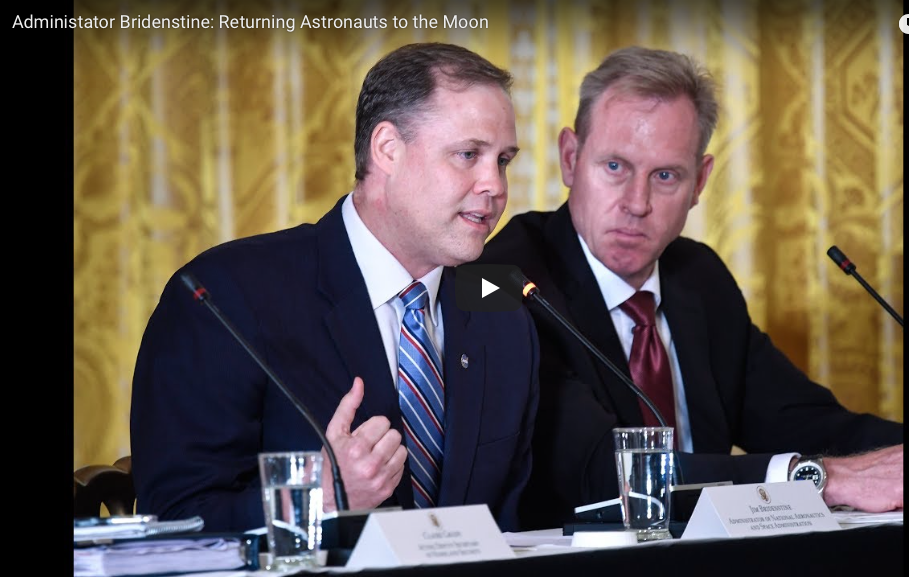 NASA Administrator Jim Bridenstine delivers remarks during a meeting of the National Space Council in the East Room of the White House, Monday, June 18, 2018, in Washington. Chaired by the Vice President, the council's role is to advise President Donald J. Trump regarding national space policy and strategy, and review the nation's long-range goals for space activities. Credits: NASA TV

“SPD-3 builds on our continued progress implementing SPD-1, which is galvanizing American space leadership by returning to the Moon with commercial and international partners, and SPD-2, which will create regulatory certainty for entrepreneurs to raise capital to grow the American economy in space.

“As we continue to thrive in space, we also have more people launching to orbit, and an increasingly complex universe of satellites overhead. SPD-3 provides guidelines and initiatives to ensure that America is a leader in providing a safe and secure environment as space traffic increases. Common sense space situational awareness and traffic management will be good for our economy and will help provide a more stable environment for the burgeoning space economy.

“Reducing the growing threat of orbital debris is in the interest of all nations, and NASA looks forward to working with the National Space Council, the Department of Commerce and other partners on a path forward. SPD-3 and the directives that preceded it, along with the President’s enthusiasm for our nation’s innovative work, are providing a strong foundation for our nation to once again do the big things that will shape a bright future for all of us in space.”

Space Policy Directive – 3 provides guidelines and direction to ensure that the United States is a leader in providing a safe and secure environment as commercial and civil space traffic increases. As space becomes increasingly contested, the demand for the Department of Defense (DoD) to focus on protecting U.S. space assets and interests also increases. Simultaneously, the rapid commercialization of space requires a traffic management framework that protects U.S. interests and considers the private sector’s needs.

The new Directive seeks to reduce the growing threat of orbital debris to the common interest of all nations.

The United States will maintain and expand its leadership in space by increasing its capabilities and developing standards and best practices. This effort will:

The new Space Policy Directive builds on the President’s efforts to reinstate the United States leadership role in space.