[SatNews] India’s Geosynchronous Satellite Launch Vehicle has successfully deployed a communications satellite Thursday, August 27, with the rocket’s ninth flight for the Geosynchronous Satellite Launch Vehicle (GSLV) across its Mark I and II variants, lifting the 2117 kg GSAT-6 spacecraft into the atmosphere. The launch was on schedule at 16:52 local time (11:22 UTC) and took place from the Satish Dhawan Space Centre on Sriharikota Island. After reaching GTO, GSAT-6 will use its own propulsion system to reach its final geostationary orbital home and will be stationed 0 at 83 East longitude.

The Cryogenic Upper Stage (CUS) being flown in GSLV-D6 is designated as CUS-06. A Cryogenic rocket stage is more efficient and provides more thrust for every kilogram of propellant it burns compared to solid and Earth-storable liquid propellant rocket stages. The cryogenic stage is technically a very complex system compared to solid or Earth-storable liquid propellant stages due to its use of propellants at extremely low temperatures and the associated thermal and structural challenges. Oxygen liquifies at -183 deg C and Hydrogen at -253 deg C. The propellants, at these low temperatures, are to be pumped using turbo pumps running at around 40,000 rpm. "GSLV-D6 flight is significant since it intends to continue the testing of CUS," according to ISRO. 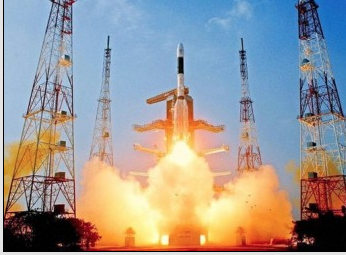 This is the third time the indigenously developed Cryogenic Upper Stage (CUS) is being carried on-board during a GSLV flight. GSLV-D6 flight is significant since it intends to continue the testing of CUS. GSLV is designed to inject 2 ton class of communication satellites into Geosynchronous Transfer Orbit (GTO).

The payload of Thursday’s launch, GSAT-6, is a 2,117-kilogram (4,667 lb) communications satellite constructed by ISRO around the I-2K satellite bus.

Designed for nine to twelve years of service, the satellite carries an 80-centimetre (2.6 ft) C-band antenna for providing a single fixed beam and a six metre (16-foot) deployable antenna that will facilitate five S-band spot beams. Electrical power comes from a pair of solar arrays generating 3.1 kilowatts for the spacecraft’s systems.

Following launch the spacecraft will make use of a liquid bipropellant apogee motor, fuelled by monomethylhydrazine and mixed oxides of nitrogen, to achieve geostationary orbit where it will be operated at a longitude of 83 degrees east. According to reports the satellite will most likely be used to relay military communications.

First flown in April 2001, the GSLV has had something of a troubled history; of its eight launches to date, three completed their missions successfully, one reached a lower-than-planned orbit which was corrected at the expense of several years’ operational life for its payload, one reached an unusable low orbit that could not be corrected and three failed to achieve orbit altogether.

GSLV-D6 vehicle is configured with all its three stages including the CUS similar to the ones successfully flown during the previous GSLV-D5 mission in January 2014. GSLV-D5 successfully placed GSAT-14 satellite carried on-board in the intended GTO very accurately.

The main engine and two smaller steering engines of CUS together develop a nominal thrust of 73.55 kN in vacuum. During the flight, CUS fires for a nominal duration of 720 seconds. 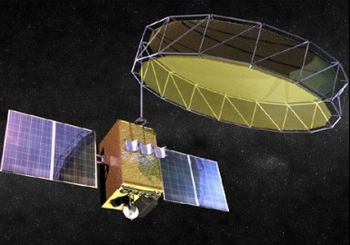 "The performance of GSLV D-6 has been normal and the intricacies of the rocket have been understood," ISRO chairman A.S. Kiran Kumar said soon after the launch, from the Mission Control Room.

The Thursday's launch could mean that the national space agency was increasingly confident of launching the heavy-weight rocket with indigenous cryogenic upper stage, which can lift payloads weighing about 2.2 tonne.

Mission Director Umamaheswaran said that the launch was an "Onam" gift of ISRO to the country.

The 2,117 kg-weighing GSAT-6 communication satellite is aimed at primarily benefiting the country's strategic users and other specific authorized users. The cuboid-shaped satellite with a mission life of nine years also includes a first-of-its-kind S-Band unfurlable antenna with a diameter of six meters, which is ISRO's largest antenna ever made for a satellite.