For more than four decades, scientists have been able to determine whether their experiments are suitable for use in space by carrying out TEXUS missions.

OHB System AG, a subsidiary of the listed space and technology group OHB SE, has held a significant interest in the program ever since it was first launched. An unmanned TEXUS rocket completed its scientific mission in space after lifting off from northern Sweden on November 15, 2019. 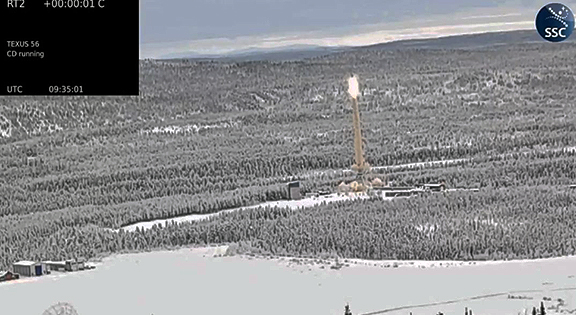 Photo is courtesy of SSC and Airbus.

At 10:35 local time TEXUS-56 took off from the ESRANGE Space Center (ESC) near Kiruna, reaching an altitude of 266 kilometers. During the parabolic flight, weightless conditions prevailed on board for 6 minutes. Since the scientific experiments and technology tests carried on board the rocket can only be conducted under space conditions during this period, everything must function smoothly.

Horst Pfeuffer, TEXUS project manager at OHB System AG, said the company provided the necessary systems on board and on the ground in cooperation with the ground stations in order for experimenters to obtain their data during the free flight phase and control their experiments by telecommand. On board the TEXUS-56, a new Ethernet-based transmission system was tested which will significantly expand and simplify the communication options available for the experiments in future missions.

As in the previous TEXUS missions, Pfeuffer and his team were responsible for integrating the experiments on board the research vehicle. They also again handled the service systems comprising a service module (with telemetry, telecommand, TV image transmission, payload motion control and µg measurement units) and a recovery system as well as “Ethernet for TEXUS” (E4T). The OHB service system provided reliable positioning data ensuring that after it had returned to the Earth on a parachute the payload could be located quickly and recovered together with the experiment modules. The experimenters thus had the necessary quick access to their experiments.

Three experiments were accommodated on board the research vehicle on this mission: The German Aerospace Center (DLR) selected InSituKris, an experiment from the University of Freiburg that has already been allowed to “sniff” space air twice and performs in-situ observations of foreign phase particles in fluids and their interaction with the crystal front. ESA was involved in two new experiment modules: McGill University of Montreal contributed PERWAVES (Percolating Reactive Waves in Particulate Suspensions), and Braunschweig Technical University the ICAPS (Interactions in Cosmic and Atmospheric Particle Systems) experiment, which had previously passed the drop tower.

Commenced in 1976 as a national research program, TEXUS is the German acronym for “Technological experiments in weightless conditions” (Technologische Experimente unter Schwerelosigkeit). The client for the current mission is the European Space Agency ESA. OHB performs the tasks in conjunction with the DLR Mobile Rocket Base (MORABA) in a subcontract for Airbus Defence and Space, Bremen.