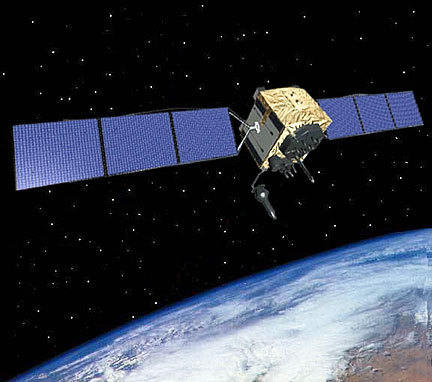 The Global Positioning System IIF satellite, developed and built by Boeing, is the next generation of GPS space vehicle. (U.S. Air Force graphic)
[SatNews] A more robust signal is now evident for the GPS constellation...

The 50th Space Wing successfully completed a two-phase GPS constellation expansion known as "Expandable 24" June 15th. The expansion increased global GPS coverage and is now providing civil, military and commercial GPS users with a more robust signal and a higher probability of signal acquisition in terrain-challenged environments officials said. The GPS constellation consists of 24 operational slots positioned within six equally-spaced orbital planes surrounding the earth. This plane/slot scheme and enhanced satellite placement ensure GPS users receive the most accurate navigation data at any time, at any place around the world.

"This marks another successful milestone in our continued commitment to modernize our weapon system," said Lt. Col. Jennifer Grant, the 2nd Space Operations Squadron commander. "We take great pride in providing GPS performance that exceeds our requirements for the system, which we have been doing since 1995."

Expandable 24 is a U.S. Strategic Command commander-directed initiative, executed by the 2nd Space Operations Squadron, to reposition six satellites in the current GPS constellation. Given the strength and number of satellites in the current constellation, Air Force Space Command was in a position to enact this strategy to benefit global users. AFSPC acted on this opportunity to increase the robustness of satellite availability and overall signal in space performance by expanding three of the baseline 24 constellation slots. Phase one of Expandable 24 began in January 2010, when 2nd SOPS members performed maneuvers to reposition three GPS satellites, one of which took 351 days to maneuver. The last of the satellites completed repositioning January 18. Phase two began in August 2010 when 2nd SOPS satellite maneuvered the final three satellites to their new locations. It was completed June 15 when the last satellite arrived at its new location.

"From the planning phases in the fall of 2009 to its completion today, 2nd SOPS operators, engineers, analysts and support personnel have done an incredible job in making the Expandable 24 GPS initiative a reality," said Maj. Benjamin Barbour,the assistant director of operations. "It's an exciting time to be a part of GPS. This is a huge milestone and everyone in the squadron is excited about the accomplishment and proud to have played a part in continuing GPS's position as the 'gold standard' for global navigation space systems." The GPS constellation has now attained the most optimal geometry in its 42-year history, maximizing GPS coverage for all users worldwide, she said.