[SatNews] NSR’s most recent research on the Earth Observation (EO) market confirmed the importance of government funding for both the supply and the demand side of the business. 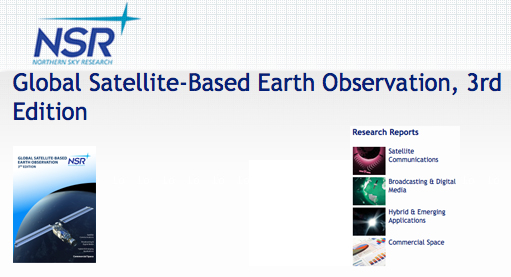 Report infopage
In its Global Satellite-Based Earth Observation, 3rd Edition report, NSR found that 69 percent of commercial EO satellite operators’ revenues came from government and military users with close to half of these from North America and Europe. As those two regions are now crippled by debt restructuring, lower financial ratings and spending reduction plans, commercial EO operators are generally expected to be affected by budget cuts to help reduce public debt burden. NGA’s Enhanced View (the single largest contract for commercial EO data) accounted for 35 percent of all EO satellite operator revenues last year, a statistic that a group of lawmakers from both sides of the House defended in a recent letter to the U.S. Government. The NGA also has smaller contracts with MDA Corporation, Telespazio and Astrium GIS for radar imagery for its internal U.S. Government clients. All of these contracts take up so much capacity that they can constrain the availability of commercial satellite for other users outside the U.S. Government. These contracts certainly represent large exposure for major EO satellite operators such as GeoEye and DigitalGlobe that can highlight the downside of having top-heavy government and military businesses these days.

Enhanced View, in addition to benefitting the intelligence community, is also about supporting the U.S. EO industry. If a government order decreases it, spending levels could be enough to maintain the industrial base, at approximately the former NGA Next View contract (around $12.5 million per month per company), or about half of Enhanced View’s spending level. The much smaller radar contracts that NGA has with MDA, Telespazio, Astrium GIS and even the recent award to RapidEye are more likely to be cut simply based on their size and the fact that it is easier politically to cut outsourcing from non-U.S. operators. Does this mean all these operators will suffer more? For DigitalGlobe and GeoEye, Enhanced View generated almost two-thirds of their 2010 revenues, with government and military contracts overall shooting up to between 75 and 80 percent, while international sales came in at about 20 to 25 percent. Cutting it at the level of Next View could mean layoffs and reduced investment, in particular on their satellites.

For Astrium GEO-Information Services, NSR believes that it has much less reliance on U.S. Government revenues proportionally even if half of its revenues are generated by government and military orders. Canada’s MDA EO data revenue estimates hover around 65 percent overall in this same segment, while Telespazio/e-Geos has approximately 70 percent of total revenues coming from government and military customers. However, thanks to orders from European, Latin American, Asian, and other non-U.S. governments, their exposure to U.S. cuts is much more limited in relative size.

In essence, NGA’s Enhanced View cuts could affect GeoEye and DigitalGlobe more than other non-U.S. operators and as a result, favor operators that are best positioned today to sell to government and military customers outside the U.S. This only reinforces the trend of EO operators pushing into non-Western markets as of late.