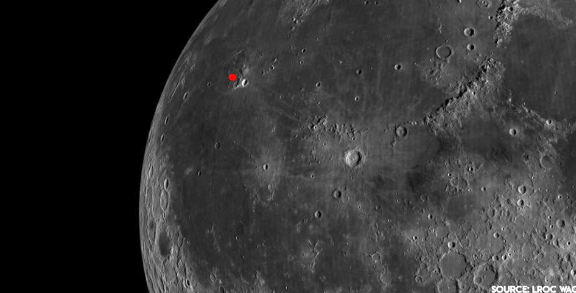 Figure 1. View of the landing site indicated by a large red dot. Image is courtesy of Intuitive Machines.

Intuitive Machines (IM) engineers have selected an area in Oceanus Procellarum near Vallis Schröterias as the landing site for the company's upcoming IM-1 lunar mission, with an anticipated launch date in October of 2021.

Vallis Schröteri, also known as Schröter’s Valley, is the largest valley on the Moon (comparable in size to the Grand Canyon) and is surrounded by Oceanus Procellarum, the largest lunar maria on the Moon. Oceanus Procellarum, also called the Ocean of Storms, covers over 10 percent of the entire Moon and has a diverse array of geological features. NASA considered a site near Vallis Schröteri for Apollo 18; now, IM is taking up the baton to conduct the initial survey. 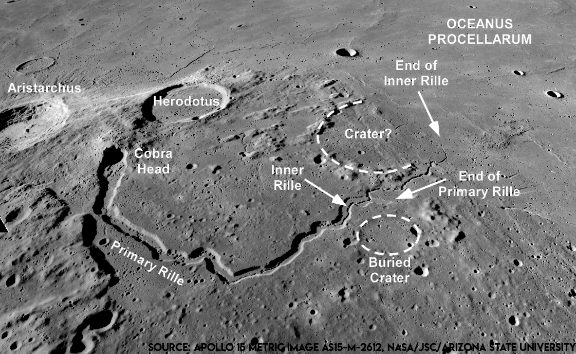 Figure 3: Southeast view across Vallis Schröteri with labels. East is towards Aristarchus on the top left and south is towards Oceanus Procellarum on the top right.

Figure 4: A closeup of the landing site with a scale of 500 meters. The square box shows 1 km2 area vicinity around the selected landing site.

Nova-C, the first lander wholly developed by a private company, will deliver commercial cargo and five NASA-provided payloads to the lunar surface. These payloads will conduct scientific research and technology demonstrations as part of NASA’s Commercial Lunar Payload Services (CLPS) program, in preparation for sending astronauts back to the Moon in 2024.

The Nova-C Flight Dynamics team considered every available detail within one degree of the 25N, 50W location to identify an ideal 200-meter landing site for the mission. The chosen landing site is flat, free of large craters and rocks, and has abundant sunlight throughout the 14-day lunar “day.”

Figure 5: Nova-C descent trajectory from the east passing over the Vallis Schröteri rille with Aristarchus Plateau to the south. 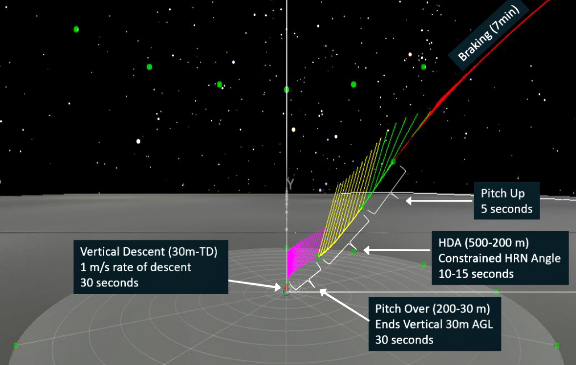 Figure 6: A closeup of the last two minutes prior to landing. The red segment shows the end of the Braking segment where the orbital velocity is nulled. The green segment is the Pitch Up segment where the vehicle rotates to near-vertical. The yellow segment is the Hazard Detection Avoidance segment where landing sensors scan the intended landing area for a 10-meter safe landing location. Finally, the pink segment combines the Final Approach and Vertical Descent segments which end in touchdown on the lunar surface at the designated site

The site is very interesting from a scientific perspective. Like other sinuous rilles (valleys), Vallis Schröteri is believed to have been formed by a collapsed lava tube from volcanic material that flowed from a crater (Cobra Head) located on the elevated Aristarchus Plateau into the low Oceanus Procellarum. In addition, the surrounding mare may include materials from the beginning of the Copernican Period (one billion years ago).

Nova-C will launch on a SpaceX Falcon 9 rocket from Pad 39A at the NASA Kennedy Space Center, the Apollo Saturn V launch pad. The launch is nominally scheduled for October 11, 2021 with multiple subsequent launch opportunities. This launch epoch allows for a near-optimal transfer with a 6-day transit from the Earth to the Moon and provides 14 days of sunlight at the target landing site after landing.

The Intuitive Machines Nova-C mission will test an automated Precision Landing and Hazard Avoidance (PLHA) landing system paving the way for NASA astronauts to land on the lunar surface by 2024.

IM President and CEO, Steve Altemus, said this kind of lunar landing assessment hasn’t been done since the 1972 Apollo mission. The tremendous effort the IM team has put forth to fully characterize the descent approach, landing site options and lighting conditions to ensure mission success, is a paramount task required to fulfill the firm's obligation to private payload customers and NASA.

IM Vice President of Research and Development, Dr. Tim Crain, added that the Flight Dynamics team really outdid themselves evaluating trajectories and landing conditions during each launch window. They managed to design this landing site that is supported across other primary and secondary four-day launch windows. No one in Houston has looked as seriously at landing sites for a funded lunar landing mission in almost 50 years. 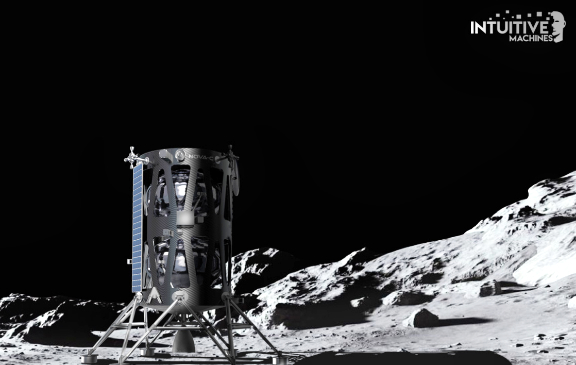