Agreement Reached with Russia for Two Additional Seats Aboard Soyuz Rocket for Transporation of U.S. Astronauts to ISS 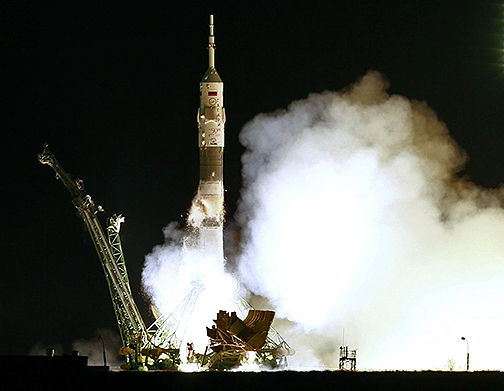 Russia and the United States have agreed on two additional places on board of Soyuz carrier rockets for journeys of NASA astronauts to the International Space Station (ISS), Roscosmos Executive Director for Manned Programs Sergei Krikalyov told the TASS infosite.

"The documents have been approved," Krikalyov said, adding that it the procedure to sign the papers took place before a recently reported incident with Crew Dragon spacecraft. According to Krikalyov, there was no new draft of the document as it was "Simply an update to the previously signed contract, everything was in work order and there was no solemn ceremony to mark the signing of the documents. We have agreed on all details, extended the term of the previous contract and this was all about it.

According to earlier reports, NASA planned to conclude a deal with the Russian Space Agency (Roscosmos) for the purchase of two additional seats on Russian carrier rockets Soyuz in 2019-2020. NASA's chief of human spaceflight, Bill Gerstenmaier, announced on Wednesday that SpaceX had a problem in April during a fire test of its Crew Dragon parachute system saying that "the test was not satisfactory" and "We did not get the results we wanted. The parachutes did not work as designed… The three remaining chutes did not operate properly."

Asked whether the recent failure of the Crew Dragon fire tests provoked Russia and the United States to have additional talks regarding extra places for US astronauts on board of Soyuz space carriers, Krikalyov said "No. There were no talks at all following this incident."

Various media sources reported last month about an anomaly that had occurred during the static fire tests of the Crew Dragon’s engines at the space center at Cape Canaveral. As a SpaceX employee explained, the initial tests were successful, but the last one caused an anomaly at the test site. SpaceX specified that its specialists were working together with NASA to identify the causes of the anomaly.

The Crew Dragon made by the US SpaceX was launched for the first time to the orbital outpost with a spacesuit-clad dummy on March 2 and it docked to the space station on March 3. After its descent by a parachute, the spacecraft splashed down in the Atlantic Ocean.

The Crew Dragon’s first manned launch was planned for July 2019, but a source in the space industry told TASS that the flight with astronauts might be rescheduled for November due to considerable delays during the tests. Only Russian Soyuz spacecraft have been used since 2011 to deliver cosmonauts, astronauts from the United States and other countries to the ISS. In the United States, SpaceX and Boeing are developing new spacecraft for manned flights.