[SatNews] A series of tropical storms and heavy monsoon rains combined to make 2011 the worst flood season on the lower Mekong River since 2000.

Floods swept across Cambodia, impacting 17 of the country’s 24 provinces. As of October 18, at least 207 people have died in the floods and 34,000 families have been evacuated, said the Cambodian Red Cross. These images compare seasonal flooding along the Mekong River and the Tonle Sap (Tônlé Sab) on October 18, 2011, and October 26, 2006. Taken by the Moderate Resolution Imaging Spectroradiometer (MODIS) on the Aqua and Terra satellites, the images include both infrared and visible light to increase the contrast between water and land. Water is black or dark blue, while the surrounding plant-covered land is green. Clouds are pale blue and white. Both the Tonle Sap and the Sen River flood Kompong Thom, one of the most severely impacted provinces in Cambodia. The Mekong River is also swollen in 2011 compared to 2006. 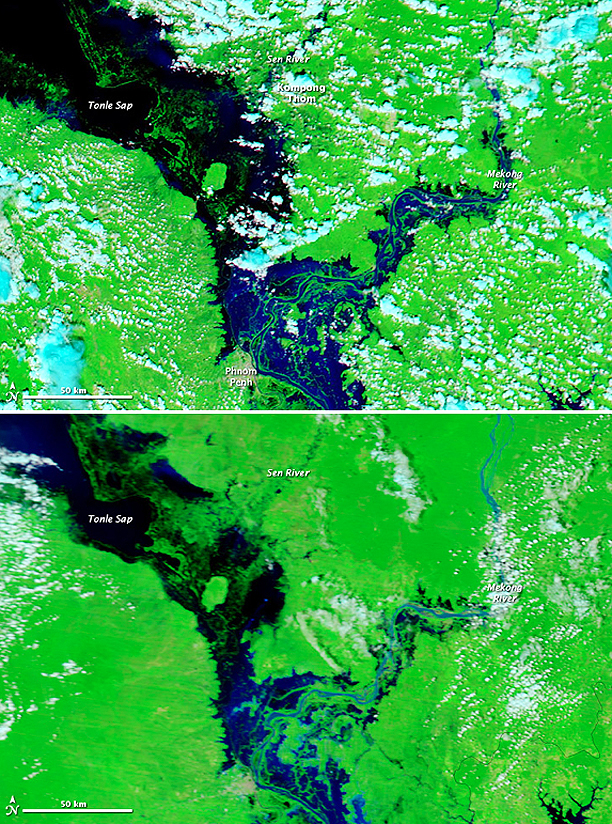 Devastating though the flood is, Southeast Asia revolves around the Mekong’s seasonal floods. Eighty to ninety percent of the river’s flow occurs during the flood season, which runs from June to November. This flush of water creates wetland habitats and draws nutrients from land into the river to feed a diverse fish population. The floods can damage crops, but they also lay down nutrient-rich soil that naturally fertilizes fields. The Mekong River Commission estimates that the annual flood causes 60 to 70 million dollars in damage, but brings 8 to 10 billion dollars into the economies of Southeast Asia. Strangest of all, perhaps, is the flood’s influence on the Tonle Sap, Southeast Asia’s largest freshwater lake. For part of the year, the lake drains into the Mekong River, but during the flood season, the Mekong pushes water back into the lake. Water flows into the wetlands between the Mekong and the Tonle Sap and builds up in the lake itself. In October 2011, water levels on the Tonle Sap were above flood status—a level they last reached in 2000.