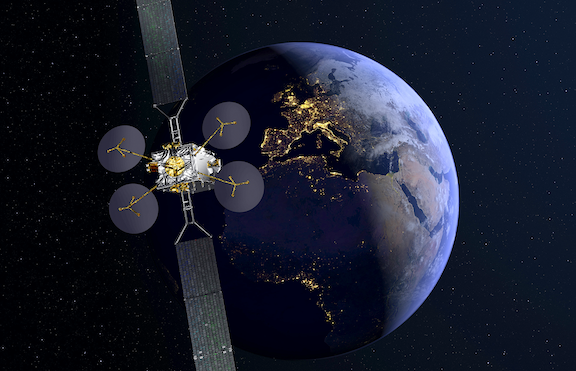 A satellite that is an ambassador of sorts, KONNECT the all electric communications satellite, will be ready for shipping to its launch site. KONNECT communications satellite built by Thales Alenia Space for the international operator Eutelsat Communications (Euronext Paris: ETL) is now undergoing final preparation prior to being shipped to the Guiana Space Center in Kourou, French Guiana, for a launch planned mid-January 2020.

KONNECT will provide high-speed internet services for markets in Africa and Western Europe. The new KONNECT satellite features all-electric propulsion and operates in Ka-band. It is the first to use Thales Alenia Space’s all-electric Spacebus NEO platform, developed under the Neosat Partnership Project conducted by the European and French space agencies (ESA and CNES).

The plan is that this is a pivotal part of Eutelsat’s strategy to restore its growth, centered around connectivity, the KONNECT satellite will also play a lead role in bridging the digital divide in Africa and Europe. The next major step forward will come in 2022 with the introduction of the KONNECT VHTS (very high throughput satellite), also under construction by Thales Alenia Space.

Offering total capacity of 75 Gbps, by next autumn this satellite will allow the operator to provide internet access services for both companies and individuals at up to 100 Mbps. In Africa, it will also allow several users to share an internet connection via public Wi-Fi hotspots; a service sold via coupons that can be paid on their mobile phones. 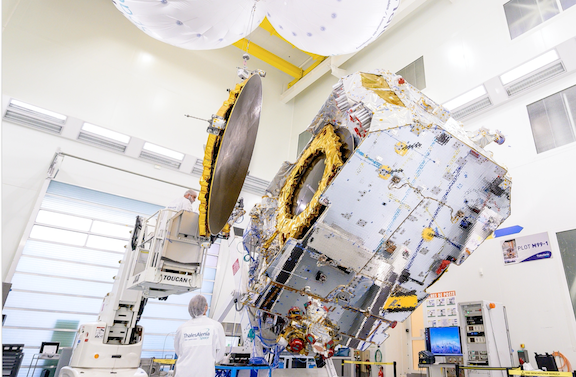 Yohann Leroy, Deputy CEO and Chief Technical Officer of Eutelsat, said that KONNECT is a key to their strategy of developing large-scale satellite internet services. It will soon be shipped to Europe’s Spaceport for a launch early next year. They would like to thank their industrial partner, Thales Alenia Space, for their all-out commitment to this program. They are involved in several of their programs, supporting their goal of reducing the digital divide. These satellites will work with terrestrial networks by providing additional connectivity resources, at a time when access to high-speed internet plays a major role in both national and regional economic and social development.

Jean-LoiÌˆc Galle, President and Chief Executive Officer of Thales Alenia Space, added that they are very proud to present their first all-electric Spacebus NEO satellite today, alongside their legacy customer Eutelsat. KONNECT combines innovation and in-orbit heritage to offer a fully modular platform along with an innovative and intelligent payload to provide high throughput, highly agile services in Ka-band. This technological success has been possible thanks to the support from the French and European space agencies, which helped them develop Spacebus NEO, and from the French Investment in the Future Plan, for high-throughput capabilities.

Thales Alenia is the joint company between Thales (67 percent) and Leonardo (33 percent).