From approximately 22,236 miles in space, NASA and the National Oceanic and Atmospheric Administration's (NOAA) newest Geostationary Operational Environmental Satellite — GOES-15 — took its first full-disk visible image of the Earth on April 6th starting at 17:33 UTC (1:33 p.m. EDT). The black and white full-disk image showed North and South America. Draped across the U.S. was a stationary front, indicated by a drape of clouds from New England westward to Kansas, where a low pressure area is located. West of the low is an approaching cold front which lay over the Rocky Mountains, bringing snow to parts of Wyoming, Idaho and Montana. Mostly clear skies are seen over Washington, D.C. and the Chesapeake Bay, the southeastern U.S., Gulf of Mexico, California and Mexico. 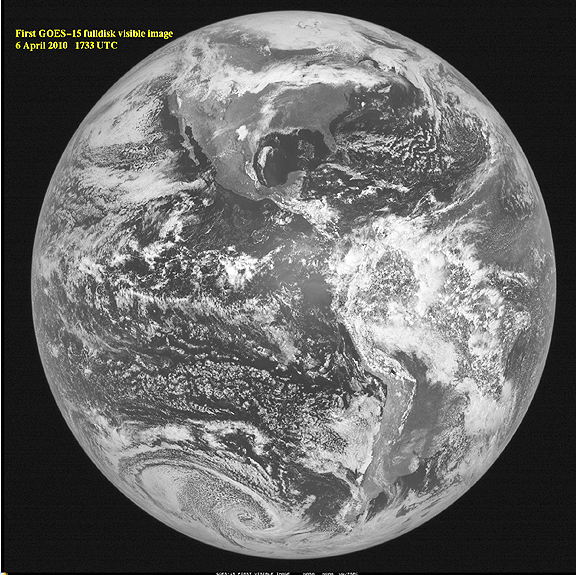 GOES-15, launched on March 4, 2010, from Cape Canaveral, Florida, joins three other NOAA operational GOES spacecraft that help the agency's forecasters track life-threatening weather and solar activity that can impact the satellite-based electronics and communications industry. After five more months of tests, GOES-15 will be placed in orbital storage mode, ready for activation if any of NOAA's operational GOES spacecraft experiences trouble. GOES-15 is the third and final spacecraft to be launched in the GOES N-P Series of geostationary environmental weather satellites. With two operational satellites, they provide weather observations that cover over 50 percent of the Earth's surface. NASA's GOES Project is located at NASA's Goddard Space Flight Center, Greenbelt, Maryland. On March 24th, the NASA and NOAA team began post launch verification testing, which will last for approximately 150 days. Once all the systems are checked out, the satellite will be turned over to NOAA for operational control and will be stored in-orbit, ready for activation should one of the operational GOES satellites degrade or exhaust their fuel.