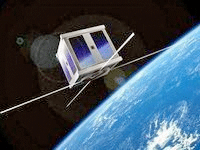 Artistic rendition of the Yamal-601 satellite.

The Yamal 601 satellite, weighing over 5,700kg, will be built by Thales Alenia Space on the flight proven Spacebus 4000 platform. The satellite will be launched by ILS Proton into geostationary transfer orbit and has an anticipated service lifetime of 15 years. Yamal 601 satellite will replace Yamal 202 and will provide fixed communications and transmission services in C-band over Europe, the Middle East, Northern Africa and South-East Asia from the orbital position at 49 degrees East. This satellite is also designed for development of business in Ku- and Ka-bands in the Russian market.

The Proton vehicle is built by Khrunichev State Research and Production Space Center (Khrunichev), the majority owner of ILS, and a pillar of the Russian space industry. Proton has an extensive heritage with 393 launches since 1965. ILS has the exclusive rights to market the Proton vehicle commercially and has launched 84 missions over its 20 year history.

“We are pleased to select Proton to launch the Yamal 601 satellite, which will enable us to extend our activity in delivering services in Russia, including broadband services for Gazprom, corporate and consumer markets based on Ka-band satellite capacity, and will also provide important business continuity for our international customers,” said Nikolay Sevastiyanov, general designer of Gazprom Space Systems. “We have relied on Proton to launch all our satellites and we have full confidence in ILS, Khrunichev and the performance of the Proton vehicle for our future missions. We look forward to the same outstanding service, support and transparency we have received with ILS and Khrunichev for our upcoming launches.”