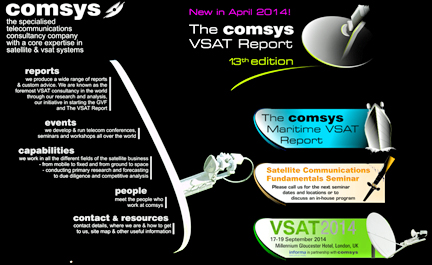 [SatNews] According to the latest edition of the COMSYS “VSAT Report” the VSAT industry has powered through the economic downturn of the previous few years and has exhibited significant growth in both hardware sales and service revenues.

This has been driven primarily by demand from the financial, carrier and government sectors as well as specialist vertical segments including mining, oil & gas, aeronautical and maritime. Users expect reliable broadband intensive connections regardless of location and VSAT services have grown steadily on the back of this demand.

COMSYS, the world leader in analysis of the VSAT industry, today published the 13th edition of its renowned report on the state of the market and forecasts for the next three years. The report has been published every two years since 1987 and is the result of two man years of primary research into the VSAT market – involving interviews and visits to all of the major manufacturers and over two hundred VSAT operators around the world. VSAT (Very Small Aperture Terminal) networks are not just a primary driver for satellite communications links into remote areas, in which they serve as markers for digital inclusion, cellular backhaul and mobility, but are a critical technology within some of the world’s largest corporate networks in the USA and Europe as well as the developing world. The latest report comprises over 1,500 pages with 204 tables and 231 figures and charts, and provides in-depth analysis of thirty VSAT different platforms and over 160 VSAT operators worldwide. The report’s primary findings are as follows:

The 13th edition of the COMSYS VSAT Report since its inception in 1987 is now available. The report provides in-depth analysis of all of the major players in the global VSAT market based on COMSYS’ unique combination of company visits, background research and personal contacts within the industry. More information on the report can be found at http://www.comsys.co.uk/.