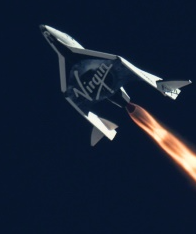 SpaceShipTwo is a commercial version of SpaceShipOne, the first private spacecraft to reach the edge of space in 2004

A successful test flight, two years after a terrible disaster with the loss of a life.

Virgin Galactic's new spaceship has made a successful first glide flight, a key step after a deadly crash of its predecessor two years ago, the spaceflight company said on Saturday.

Released from the mothership, VSS Unity flew home to Earth on its own, according to the company owned by British billionaire entrepreneur Richard Branson.

"VSS Unity has landed. Vehicle and crew are back safe and sound after a successful first glide test flight," Virgin Galactic tweeted at #SpaceShipTwo.

Unity's weight was kept light for the first flight, Virgin Galactic said. Its success now opens a phase of tougher flight testing before the spacecraft's hybrid rocket motor will be fired in flight.

The company's efforts faced a major setback in October 2014, when the first version of the SpaceShipTwo disintegrated over California's Mojave Desert.

Although the pilot was injured, he successfully deployed his parachute. The co-pilot died.

Virgin Galactic unveiled the new spaceship at the Mojave site in February. It looks largely the same as its predecessor.

The company stressed that commercial space flights would not take place until it is satisfied it can carry them out safely.

SpaceShipTwo is a commercial version of SpaceShipOne, the first private spacecraft to reach the edge of space in 2004.

The company's goal is to take tourists to the edge of space, more than 62 miles (100 kilometers) above Earth.

The new craft may someday carry six passengers on three-hour suborbital flights, offering them the possibility of momentary weightlessness and unparalleled views of Earth.

Despite the hefty $250,000 price tag, more than 600 would-be astronauts have already signed up, including Hollywood actors Leonardo DiCaprio and Ashton Kutcher.