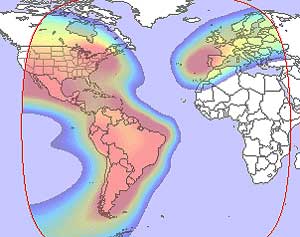 ...to provide live transmission of international sporting events originating in, or broadcast to, North America, Latin America and Europe. Eurovision, a longstanding SES customer, is increasing capacity to 54MHz and using the SES teleport and the NSS-806 satellite to broadcast the London 2012 Olympic Games and Paralympic Games (which start on August 29th) to TV audiences across Latin America.

Located at 40.5 degrees West, NSS-806 is among several SES satellites providing the EBU, BBC and other broadcasters, extensive coverage of the London 2012 Olympic Games into North America, Latin America and throughout Europe. The capacity will also be used for the contribution and distribution of major 2013-2014 sporting events in HD, such as Tour de France, Formula One, European and Latin American Football including 2014 FIFA World Cup in Brazil. This will enable sports fans in three continents to watch all races and matches live. NSS-806’s tailored, high-powered hemispheric beam provides simultaneous coverage of both Europe and the Americas, with virtually complete coverage of North, Central and South America, ensuring the maximum reach throughout Spanish and Portuguesespeaking markets. The satellite has a line-up of over 270 channels and reaches almost 19 million homes across Latin America.