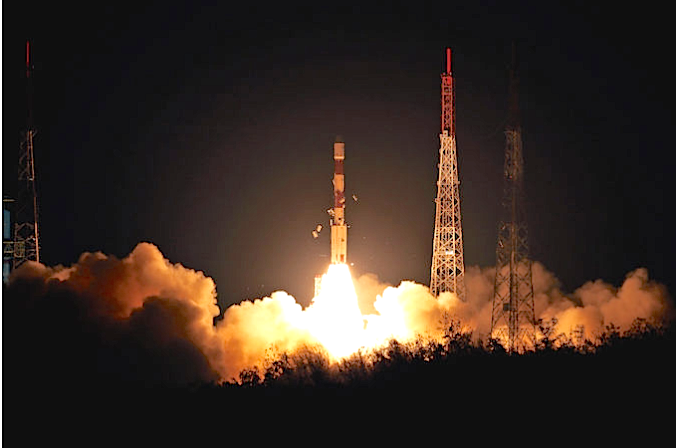 The launch of the IRNSS-1I navigation satellite went smoothly at the Sriharikota rocket port, around 105 km from Chennai. The 145-foot-tall (44-meter) Indian Polar Satellite Launch Vehicle,  fired into orbit Wednesday with a replacement satellite for the navigation network. The IRNSS or NavIC (Navigation with Indian Constellation) is similar to the United States' GPS system.

The process continued as the rocket's liquid-fueled second stage Vikas engine, then a third stage solid rocket motor and lastly a twin-engine fourth stage fired in succession as the PSLV dropped the finished rocket components over the Bay of Bengal.

The satellite navigation system NavIC consists of nine satellites that includes seven in orbit and two as substitutes. Each satellite has a lifespan of 10 years.

The IRNSS-1I carries two types of payloads for navigation and ranging. The navigation payload of IRNSS-1I will transmit navigation service signals to the users. This payload will be operating in L5-band and S-band. The ranging payload of IRNSS-1I consists of a C-band transponder, which facilitates accurate determination of the range of the satellite. IRNSS-1I also carries Corner Cube Retro Reflectors for laser ranging.

According to ISRO, NavIC is helpful for fishermen in search of fishing areas, or alert messages relating to bad weather, high waves or when they approach international maritime boundary line. NavIC is also useful for merchant ships navigation and for search and rescue operations, all made possible with a software application on a smartphone. Additionally, NavIC assists commuters and enables the tracking of vehicles for transport operators and railway systems.