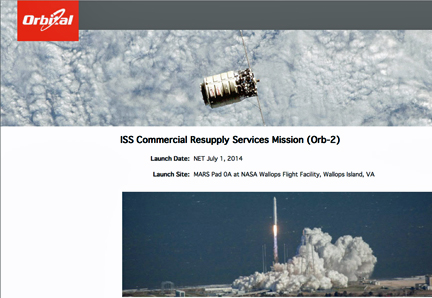 [SatNews] Orbital Sciences Corporation (NYSE: ORB) has updated its Antares launch schedule for the Orb-2 mission to a date no earlier than (NET) July 1, 2014.

Orb-2 is the second of eight cargo resupply missions to the International Space Station under the company’s Commercial Resupply Services (CRS) contract with NASA. The new launch schedule reflects the timing of the investigation into the cause of an AJ26 engine failure that occurred in late May at NASA’s Stennis Space Center during customary acceptance testing. All other elements of the Orb-2 mission are prepared to move forward, including the Cygnus spacecraft, which is fueled and, except for late-load cargo, is packed with its manifest of ISS cargo.

The engine that failed was designated for use in a 2015 CRS mission and was undergoing hot fire testing that all Antares AJ26 engines are subject to in order to ensure nominal performance and acceptance for use in Antares missions. The investigation into the failure is being led by the Antares main stage propulsion supplier, Aerojet Rocketdyne, with Orbital and NASA engineers also supporting the effort.  Once the investigation team reaches the point in their process that they can clear Antares to launch the Orb-2 mission, a targeted launch date will be established.  For now, NET July 1 is simply a planning date.

Additional updates may be obtained at http://www.orbital.com/NewsInfo/MissionUpdates/Orb-2/