SFL, which was established in 1998 as a self-sustaining specialty lab at the University of Toronto Institute for Aerospace Studies (UTIAS), has developed and refined these and other microspace technologies for 22 nano- and microsatellites launched over the past two decades. SFL is currently developing 11 new smallsats at their Toronto, Canada, facility.

Attitude Control refers to a satellite’s ability to achieve and maintain a specific orientation in orbit. Difficult for smaller satellites of low mass, attitude control is a necessity for precise pointing of onboard sensors either at the earth or out into space. SFL achieved miniaturization breakthroughs in attitude control performance over its 20-year history which in turn enabled barrier-breaking missions on smaller than expected satellites.

Another microspace breakthrough has been the SFL Modular Power System. From a single architecture, this system can be scaled up or down to meet the power requirements of smallsats that range in size from 3 to 500 kg. in size. The ability to scale from 1 watt to 1.5 kilowatts in power output without overhauling the system architecture enables SFL to keep development costs down while accommodating a variety of mission applications.

In addition, SFL is developing next-generation Propulsion Systems, including a Cylindrical Hall Thruster and a mono-propulsion system based on nitrous oxide. These propulsion systems will be used for station keeping, constellation management and deorbiting of smallsats. The work was initially funded in part by the Canadian Space Agency. 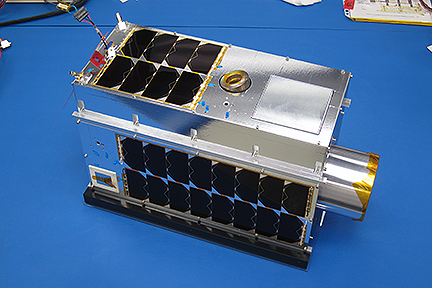 Photo of GHGSat — its mission is to become the global reference for remote sensing of greenhouse gas (GHG) and air quality gas (AQG) emissions from industrial sites, using satellite technology.

Photo is courtesy of GHGSat.

“Our goal is the same today as it was 20 years ago — to develop and adapt technologies that enable smaller satellites to cost-effectively perform the missions once believed only possible with expensive larger satellites,” said SFL Director Dr. Robert Zee.He added that accurate attitude control capabilities and precise pointing resulted in SFL being selected to build the upcoming commercial GHGSat-C1 and C2 greenhouse gas monitoring microsatellites for GHGSat Inc. These capabilities will also play important roles in the NEMO-HD video imaging smallsat the company is building for Slovenia and the DMSat-1 environmental monitoring microsatellite now under development for Dubai.

For more information on the 4S Symposium, visit atpi.eventsair.com/QuickEventWebsitePortal/4s2018/4s

Details on the 2018 CANSEC may be found at www.defenceandsecurity.ca/CANSEC/cansec/Overview.