[SatNews] As in-flight connectivity grows at double-digit rates over the next decade, the competitive aero environment is intensifying especially on 2 fronts: throughput and volume—this entails offering ever more bandwidth per plane and increasing volume via line-fit of aircraft.

The recent Aircraft Interiors Expo in Hamburg saw in-flight entertainment and connectivity (IFEC) front and center with many stories emerging from the show; however, two news items hinted to where the market is headed in the years ahead: GEE’s connectivity deal with SouthWest for new B737 MAX, and ViaSat winning accolades from the industry for providing 12 Mbps per second Wi-Fi service to each passenger on JetBlue.  The former highlights the immediate need for factory-approved installation of satellite equipment on narrowbody aircraft, and the latter shows how advanced HTS satellite capacity is slowly but surely making an impact on the market.

In NSR’s recently released Aeronautical Satcom Markets, 3rd Edition report, it was noted that with high-throughput satellites (HTS) connectivity coming online, such as that offered by ViaSat and Intelsat EPIC, lower-data rate services such as air-to-ground (ATG) will have less appeal to fulfill the growing passenger demand for bandwidth.  NSR’s take-rate analysis showed that a higher percentage of passengers use Ku-band service than ATG, with 7.2 percent compared to 6.7 percent, respectively.  And when GEO-HTS service is available and “free”, as is the case for JetBlue aircraft, usage is simply off the charts at 40 percent.  In a nutshell, HTS connectivity has a much higher take-up rate than FSS Ku-band service, which has a greater percentage of users on a per aircraft basis than ATG. A correction downwards would certainly occur if passengers took the paying ‘Premium’ service offered by JetBlue instead, but the fact that all major service providers such as Panasonic, GEE and GoGo entered into HTS capacity deals to meet growing bandwidth demand from passenger airlines shows the trend clearly. 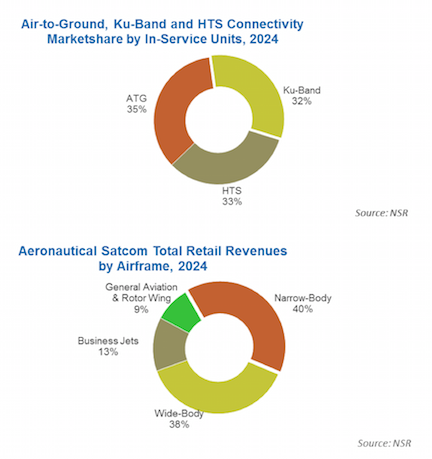 For GEE, the deal with SouthWest hinges on line-fitting Boeing 737s aircraft with its connectivity solution, for which it has yet to gain approval from the FAA.  Narrowbody aircraft such as the B737s will represent more than 72% of all Boeing and Airbus planes deliveries in the next twenty years; in the neighborhood of 47,700 new aircraft.  It’s easy to see why GEE would want to tap into this huge market and equip planes before they hit the tarmac.  And it is exactly what GEE hopes to do in time for the first SouthWest B737s MAX that will launch in 2017 under a contract that NSR estimates could see 390 aircraft outfitted (if all options are exercised). The narrowbody market is the commercial passenger aircrafts’ volume business where GEE currently leads by far, but it will be a battleground where Panasonic and others will also fight for a bigger piece of the pie.

On one hand, offering HTS capacity to provide more bandwidth to meet passenger connectivity demand is one track that is seeing more ‘traffic’ as the satellite-based IFC market grows. Similarly, service providers offering line-fit IFC equipment on single-aisle aircraft are a fast track to grow volume and increase market share.  These two tracks will likely be the right paths to take for success in the IFC market.