Under a pilot program, the UCC will use IntelsatOne Mobile Reach Solar 3G satellite services delivered via the Intelsat 37e satellite and Gilat’s SkyEdge II-c multi-application platform to provide high-quality, resilient and affordable broadband connectivity to two communities — Bufundi in Rubanda and Kibuku in Ntoroko. The improved performance, efficiency and lower total cost of ownership delivered by Intelsat 37e, the fifth of the Intelsat EpicNG satellites and one of three serving Africa, will enable Uganda to quickly and seamlessly extend broadband connectivity to rural areas of the country in a cost-efficient manner. 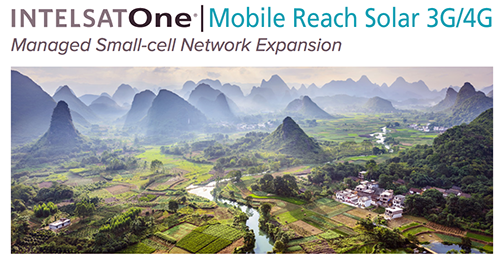 The objective of the remote connectivity project is to demonstrate the ease of deploying the satellite solution and study the commercial viability and sustainability of the solution. This effort will be instrumental in helping to accelerate the Uganda government’s broadband strategy, particularly its goal of achieving minimum broadband speeds of 3 Mbps and coverage of 100 percent of Uganda’s rural areas by 2020.

Committed to working with member states to achieve the United Nation’s Sustainable Development Goals by 2030, the International Telecommunications Satellite Organization (ITSO) played a critical role in coordinating efforts and bringing the private and public entities together to benefit the two communities in Uganda.

Mobile Reach Solar 3G, part of the IntelsatOne portfolio of managed and terrestrial services, is an end-to-end, solar-powered managed solution powered by Gilat cellular solutions, for mobile network operators (MNOs) who want to expand their service footprint efficiently into ultra-rural regions where traditional network buildouts are uneconomical. Under the partnership, Intelsat oversees the space segment, traffic configuration and project management, while Gilat Satellite Network supplies, installs, and maintains the ground network infrastructure. This results in a turnkey, solar-powered package that provides everything an MNO needs to expand 3G service over a 2.5-kilometer radius, including power supply, mono-pole, and all satellite and cellular equipment. For the pilot project, MTN Uganda will integrate the sites into the core network.

Godfrey Mutabazi, Executive Director of the Uganda Communications Commission, said that xtending broadband connectivity and delivering fast, affordable Internet services to everyone in Uganda remains one of the Uganda government’s primary missions. With more than 80 percent of the nation's population living in rural areas, this has been a technological and budgetary challenge. With this combined effort and the innovative approach the companies are bringing, citizens in some of the country's most isolated communities will experience the power of reliable connectivity and the economic and social benefits it delivers.

Intelsat CEO, Stephen Spengler, noted that satellite services have been at the core of communications networks throughout Africa for decades, but too many people in rural areas remain unconnected. Intelsat continues to improve the technology in space and throughout the delivery ecosystem to make it easier to access satellite connectivity. But simply improving technology is not enough to trigger the widespread expansion of networks. The entire telecommunications sector needs to make it simpler to integrate all technologies into a seamless network to truly overcome the challenges that network operators and governments face. New business models such as IntelsatOne Mobile Reach will truly solve the cost and deployment problems associated with reaching rural populations and be the tipping point in the effort to support economic growth, deliver life-changing services, and connect all of Africa.

Patrick Masambu, Director-General of ITSO, said that the organization is strongly committed to working closely with its member states to achieve the UN Sustainable Development Goals of 2030. The hope is that this pilot project is that it will succeed at the Bufundi and Kibuku sites and could then be expanded throughout Uganda and further replicated in other ITSO member states. The organization plans to organize and fund a training event that highlights the benefits of satellite technology in Uganda and invite other member states to witness the benefits this project on-site.

Gordon Kyomukama, Chief Technical Officer, MTN, reported that at the company, extending the footprint of the firm's network and services to ensure that more people get connected has been and remains a high priority for the company,. As part of the firm's dual data strategy, new and innovative methods are sought to efficiently expand MTN's network to rural areas — every society deserves to be connected. In doing so, the company has leveraged all of the technologies at the firm's disposal and in this proof of concept, MTN has partnered with the UCC, Gilat, Intelsat and ITSO to offer a greater broadband experience. Today, we are bringing broadband connectivity to two rural communities and fulfilling this mission — to brighten the lives of customers that are serve.