Expectations are that DigitalGlobe's WorldView 4 satellite, built by Lockheed Martin, will be launched on Sunday, November 6th, with a launch window ranging from 10:30 to 10:46 a.m. local time aboard a United Launch Alliance (ULA) Atlas 5 rocket from Vandenberg Air Force Base in California. 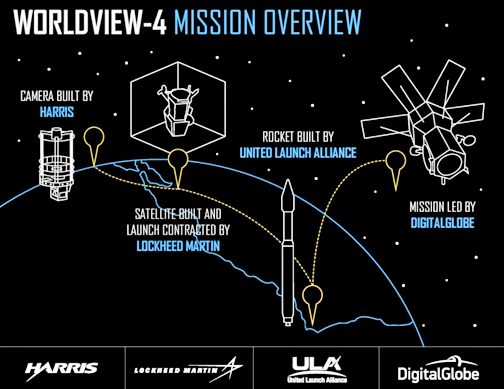 A 383 miles above the Earth polar orbit will be attained, with payload deployment expected some 19 minutes after the liftoff. This launch had to be cancelled on the original launch date of September 18th due to an extremely aggressive fire that consumed some 12,000 acres across Vandenberg's South Bases. This was considered to be the largest fire in the base' history but, fortunately, the space launch complexes and other facilities remained clear of the destruction.

All of the 200 miles of cabling have now been certified as in order by the 30th Space Communications Squadron of the US Air Force, and all appears to be a "go" for this delayed and now re-scheduled launch. WorldView 4 will be offer advanced resolution capabilities when capturing objects on the Earth's surface as small as 31cm in the panchromatic as well as imaging 4 band multispectral at 1.24 meter resolution.