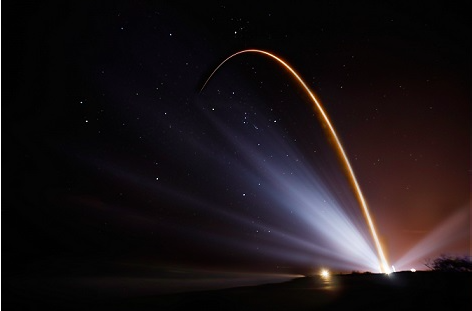 SBIRS GEO Flight 3 launches from Cape Canaveral Air Force Station, Florida, at 7:42 p.m. EST on Jan. 20. Although an Atlas V rocket gets SBIRS most of the way into orbit, the satellite uses about half of its launch weight in fuel as it propels itself to final orbit—around 22,000 miles above the Earth.

The satellite for USAF's SBIRS GEO Flight 3 was built by Lockheed Martin, and 37 minutes after ULA's Atlas V launch of the satellite signals were received. This successfully completed the first critical event in the mission to support the Air Force with early missile warning and defense.

The satellite was launched at 7:42 p.m. EST aboard a United Launch Alliance (ULA) Atlas V rocket.

“After a successful ULA launch, signal acquisition is the first critical event in SBIRS’ mission to support the Air Force with early missile warning and defense,” said David Sheridan, vice president of Lockheed Martin’s Overhead Persistent Infrared (OPIR) systems mission area. “With communications now established, our job begins to deliver SBIRS to its final orbit so we can complete deployments and operational testing in anticipation of the satellite’s formal acceptance by the Air Force.”

“Adding this third geostationary satellite to the SBIRS constellation continues our proud legacy of providing best-of-class OPIR solutions that provide real time, 24/7 data to our military and allies,” said Robert Mehltretter, vice president, Northrop Grumman Military and Civil Space. “We are looking forward to seeing our sensors capture the first light of real-time world events shortly, and seeing this data delivered to the warfighter will make us proud.”

The satellite will begin transitioning to its final location in geosynchronous orbit, approximately 22,000 miles above the Earth. There, the satellite’s solar arrays, light shade and antennas will be deployed to begin early on-orbit testing.

SBIRS GEO-1 and GEO-2, which were launched in 2011 and 2013 respectively, continue to meet or exceed performance expectations. The satellites’ sensor pointing accuracy and sensitivity for detection of targets significantly exceed specifications. While SBIRS’ primary mission is strategic missile warning, infrared data will also be made available for new qualified military and civilian applications at the Air Force’s recently opened Tools, Applications and Processing Lab in Boulder, Colorado.

The next satellite, GEO Flight 4, will undergo final assembly, integration and test prior to its planned 2017 launch. SBIRS GEO-5 and GEO-6, which are currently in production, incorporate a new common spacecraft bus, the modernized A2100, to dramatically reduce costs and cycle times while increasing the potential to incorporate future, modernized sensor suites.