Physicists at the Johns Hopkins Applied Physics Laboratory are joining researchers across the country to develop a cutting-edge computer model that will transform scientists’ understanding of geomagnetic storms and ability to forecast harmful space weather. 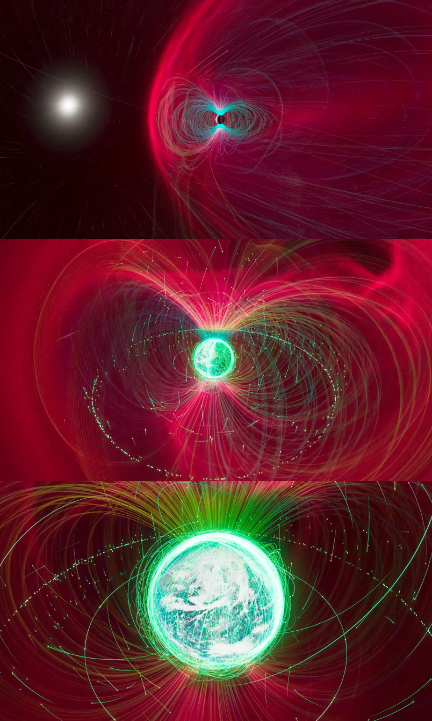 Geospace storms, simulated here sweeping over Earth’s magnetic field and “technosphere” of orbiting satellites with the GAMERA simulation tool, can produce hazardous space weather for astronauts and technology. APL leads a new science center that aims to transform understanding of these storms and allow researchers to predict space weather with unparalleled accuracy. Captured video images above are courtesy of the American Museum of Natural History.

These storms, triggered by massive eruptions at the Sun that wreak havoc on Earth’s magnetic field, can stir up space weather that cuts off satellite communications and causes blackouts on the ground.

In March, NASA announced that nine competitively selected centers will receive two years of funding for further concept development, after which only one or two of the centers will move on to the second phase and receive an additional five years of funding. Among the nine is a proposed Center for Geospace Storms (CGS), headquartered at APL.

If selected for the second phase, the team will spend the next seven years leveraging its combined expertise in space science, atmospheric science, modeling and data analysis to build a computer model that can simulate and predict the effects of solar storms on geospace with unprecedented accuracy.

Part of the problem with current models is that they don’t look at every piece: They simulate only parts of geospace, never its entirety. But that’s not their only drawback. Current models also have limited ability to simulate complex, smaller-scale interactions that scientists know are happening between systems, which, although small in scale, have global-scale consequences.

The team plans to capture both elements — a complete view of geospace with those small-scale interactions — by stitching high-resolution models together and injecting them with data from ground stations as well as past, ongoing and future space missions. Such models are necessary to contextualize and interpret observations from NASA missions. Having synergy between simulations and data analysis is an important element of the CGS’s scientific approach.

Combining models and running them at sufficiently high resolution will require significant computational processing. Ordinary computers, the team estimates, would take roughly 100 years to run just one geospace storm simulation with its final model. It will require some of the world’s most powerful supercomputers, such as those at NASA’s High-End Computing Program or one at NCAR.

With members associated with universities and public outreach programs — including institutions with a history of serving underrepresented communities — the team aims not only to develop a cutting-edge model and advance science in transformative ways but also to help cultivate the next generation of scientists from diverse backgrounds through courses, workshops and public educational programs. APL joins NCAR, Rice University, Virginia Tech, the University of New Hampshire, SRI International and others to accomplish these goals.

Jason Kalirai, APL’s Civil Space mission area executive, said this is a fantastic achievement that clearly reflects the ingenious and cutting-edge capabilities each team member has already brought to the field and will certainly bring to this project,. It’s an honor to have APL central to this ambitious project and he is thrilled and has no doubts they will achieve their goals and transform the fields of space and solar physics.

Slava Merkin, a space physicist at APL and the center’s principal investigator, added that it’s really a system of systems and requires a view of every part. Without including those small-scale effects, it’s like having blurry vision — the entire image changes. But to simulate this enormous system and simultaneously capture these very fine interactions, you need a computer model that can be both a telescope and a microscope.”

Stan Solomon, an atmospheric scientist and co-investigator at the National Center for Atmospheric Research (NCAR) in Boulder, Colorado, noted that the organization wants to exploit all of the information and machinery in current atmospheric models, while seamlessly creating an extended model. Combining whole atmospheric models with whole geospace models like this — nobody’s ever done that before.

A video is available for viewing at this direct link...