[SatNews] Due to the failure of the Proton Breeze-M in August...

ViaSat Inc. (NASDAQ: VSAT) has announced that the launch of the ViaSat-1 high-capacity satellite, previously set for the end of September, is now scheduled for mid-October. The delay is due to the launch failure of the Russian Federal Mission with the Express AM4 communication satellite that occurred on August 18th. Immediately after the failure of the Russian Federal Proton mission with the Express AM4 satellite, the Russian Inter-Agency Commission conducted a formal investigation into the cause of the failure. The Inter-Agency Commission identified the cause of the Express AM4 failure as a configuration error in the flight control software of the Proton Breeze-M upper stage. Following that investigation, Roscosmos lifted the ban on Proton/Breeze M launch processing during the last week of August and appropriate recommendations have been prepared for implementation on upcoming launches. The final clearance to launch ViaSat-1 is expected to be issued next week, following review of the investigation conclusions by a Failure Review Oversight Board (FROB) to be conducted September 8 and 9 by International Launch Services (ILS) with ViaSat participation.

Construction and testing of the ViaSat-1 high-capacity satellite at Space Systems/Loral is complete and the spacecraft is being prepared for a September 13 shipment from SS/L to the ILS launch base at the Baikonur Cosmodrome in Kazakhstan. ViaSat-1 is designed to transform the economics and quality of service that satellite broadband can provide, with the capacity to serve the accelerating growth in bandwidth demand for multimedia Internet access over the next decade and enable satellite to compete with terrestrial alternatives. The high-capacity Ka-band spot beam satellite has planned coverage over North America and Hawaii, enabling a variety of new, high-speed broadband services for WildBlue in the U.S. and Xplornet in Canada. With a capacity estimated at 150 Gbps, ViaSat-1 will become the highest capacity satellite in the world once it is safely on orbit. 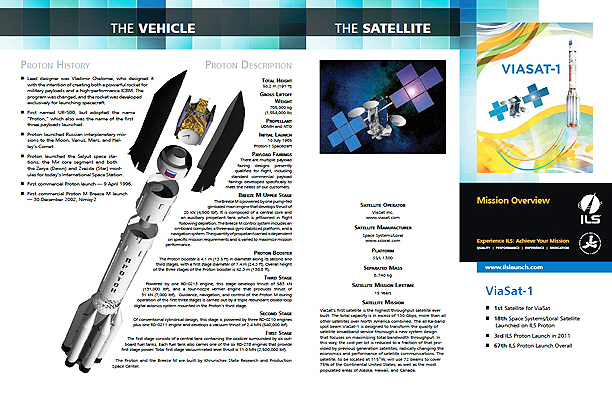