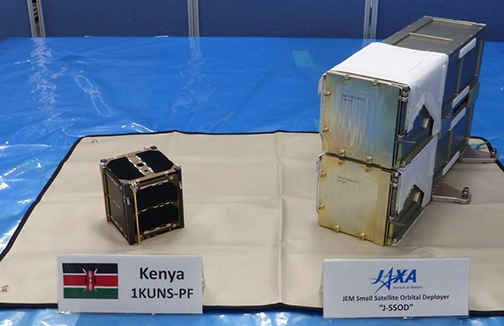 Photo of Kenya's 1KUNS-PF smallsat — the satellite’s main aim is to observe farming trends as well as monitor the nation's coastline.

If all goes as scheduled, Kenya is set to make history this Friday with the launch of the nation's first, locally made, satellite into space.

The smallsat that was developed by students and researchers of the University of Nairobi in partnership with Japanese Space Agency (JAXA) was handed over to the JAXA Tsukuba Space Center in January to prepare for deployment. UoN director of corporate affairs, John Orindi, said a delegation, led by Education Cabinet Secretary Amina Mohamed, would witness the event in Japan.

Known as the First Kenya University Nano Satellite-Precursor Flight (1KUNS-PF), it will be the first CubeSat selected to be deployed from Kibo, which is the Japanese Experiment Module of the International Space Station (ISS), according to the university. According to the UoN, the 10 centimeter cube satellite was developed under the KiboCube program run by the United Nations Office for Outer Space Affairs (UNOOSA) and JAXA.