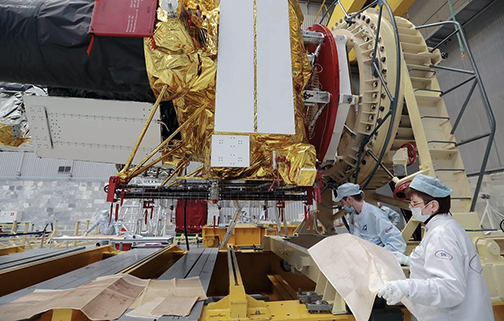 Photo is courtesy of EPA-EFE/Sergei Chirikov.

The launch of eROSITA X-Ray Space Telescope has been postponed to July, due to [undefined] technical problems.

Original posting
The launch of a Russian Proton-M carrier rocket with a DM-03 booster has been tentatively rescheduled for June 22 over a setback with the Spektr-RG space observatory that is due to be delivered into orbit, a source in the space industry told the TASS infosite.

The Spektr-RG is the joint Russian-German project intended to create a detailed map of the sky in the X-ray band. The space observatory will be scanning the sky in a broad energy band with high sensitivity and angular resolution.

"A setback with the spacecraft [the Spektr-RG] was found. The launch has been tentatively rescheduled for the backup launch date, June 22," the source said, without giving any other details. There are no setbacks with the Proton-M carrier rocket, the source said. "The launch vehicle is fully prepared for its flight. The launch time on the backup date is the same as it was on the basic date: 3:17 p.m. Moscow time. The commission will determine the readiness for the launch approximately after 09:00 Moscow time.

A special commission will determine the spacecraft’s readiness for its launch on the backup date six hours before the liftoff local time from the Baikonur Cosmodrome, the source said. Initially, the launch was planned for June 21 at 3:17 p.m. Moscow time.

The press office of Russia’s State Space Corporation Roscosmos reported earlier on Friday that the launch of the Proton-M carrier rocket with the DM-03 booster for orbiting the Spektr-RG space observatory had been rescheduled for the backup date. As Roscosmos said, a setback was revealed during preparations for the launch. No other details were reported.

A source in the domestic space industry earlier told TASS that the next window for the liftoff would be available on July 12 or 13, if the rocket’s launch did not take place on June 21 or on the backup date of June 22.