Eutelsat’s EUTELSAT 70B Joins The Service

[SatNews] Good report...”The seamless transfer of all traffic from the satellite was carried out overnight...”

Eutelsat Communications (Euronext Paris: ETL) today announced the full entry into commercial service of the powerful EUTELSAT 70B satellite at 70.5 degrees East. The seamless transfer of all traffic from the EUTELSAT 70A satellite was carried out overnight by Eutelsat’s control centre, working in close collaboration with clients and providers of uplink services. 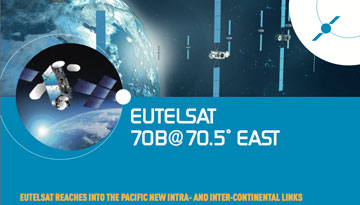 EUTELSAT 70B has been custom-designed to optimize resources at 70.5 degrees East which has been occupied by a Eutelsat satellite since 2002 and is a point of reference for data services, broadband access, GSM backhauling and professional video exchanges. With high frequency reuse, four powerful beams with coverage of Europe, Africa, Asia and Australia are connected to 48 Ku-band transponders, more than doubling capacity at 70.5 degrees East.