[SatNews] While SpaceX was planning the first civilian launch from the Cape yesterday, rumors were flying about the 'secret' payload on board the Dragon. 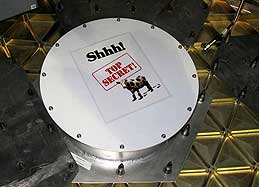 “Top Secret” payload, bolted to the floor of the Dragon spacecraft. Photo Credit: Chris Thompson
Twenty-four hours later, the launch was successful — the Dragon cycled twice at speeds of up to 17,000 miles per hour all the while carrying a large round mystery payload that turned out to be — cheese — in a tribute to Monty Python! 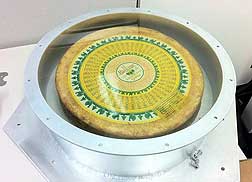 Payload revealed. Photo Credit: Chris Thompson, SpaceX
Upon landing successfully in the Pacific Ocean the Dragon was recovered and... the cheese wheel was found to be in fine condition. Imagine the cheers that went up as the seal was broken and the payload inspected.

Guess that's why when they were smiling for the press they said, "Cheese!" No one said space stuff had to be boring...perhaps some crackers to go with the cheese?