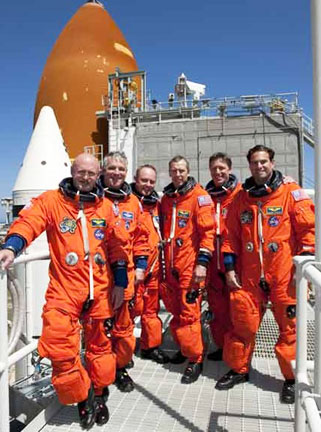 The STS-134 crew takes a break from a simulated launch countdown to take a group photo on the 195-foot level of Kennedy's Launch Pad 39A. Photo credit: NASA/Kim Shiflett

Following discussions among the International Space Station partners on Sunday, NASA has targeted the launch of space shuttle Endeavour's STS-134 mission for 3:47 p.m. EDT on Friday, April 29. The delay removes a scheduling conflict with a Russian Progress supply vehicle scheduled to launch April 27 and arrive at the station April 29. NASA managers will hold a Flight Readiness Review on Tuesday, April 19, to assess the team's readiness to support launch. An official launch date will be selected at the conclusion of the meeting.

The Progress 42 spacecraft will be delivering supplies to the station. Three more members of the Expedition 27 crew are scheduled to launch at 6:18 pm EDT on Monday, April 4, from the Baikonur Cosmodrome in Kazakhstan. Their arrival will return the station crew's size to six members. Russian cosmonauts Andrey Borisenko and Alexander Samokutyaev and NASA astronaut Ron Garan are scheduled to arrive at the station at 7:18 p.m., Wednesday, April 6, to join cosmonaut Expedition 27 Commander Dmitry Kondratyev, European Space Agency astronaut Paolo Nespoli and NASA astronaut Cady Coleman, who have been aboard the station since mid-December.