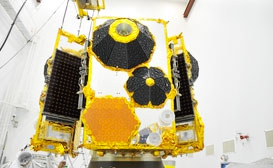 Technicians work on the new Globalstar satellites as they are mated to the Soyuz Fregat upper stage dispenser inside the pre-launch facility at the Baikonur Cosmodrome. (Photo courtesy of Arianespace)
[SatNews] Baikonur is the site for the next grouping of 2G satellites for launch...

Globalstar, Inc. (Nasdaq:GSAT) has announced that the second launch of six new Globalstar satellites is scheduled for July 11, 2011, from the Baikonur Cosmodrome in Kazakhstan. The Company also announced that engineers and technicians from launch services provider Arianespace and satellite manufacturer Thales Alenia Space have completed fueling of the satellites and all six spacecraft have now been mated to the upper stage dispenser of the Soyuz launch vehicle. The Soyuz is one of the world's most reliable commercial launch vehicles. On October 19, 2010, a Soyuz booster was used to successfully launch six new Globalstar second-generation (2G) satellites. It was also successfully utilized on eight previous occasions to launch Globalstar's first generation (1G) satellites. Later this year Globalstar plans to conduct two additional launches of six satellites per launch also using the Soyuz. The human-rated Soyuz launcher is used to transport astronauts and cosmonauts to the international space station.

The Globalstar 2G satellite constellation is designed to support the Company's current lineup of voice, Duplex and Simplex data products and services including its lineup of SPOT retail consumer products. The new satellites are designed to last for 15 years, twice the lifespan of Globalstar's first generation satellites.