[SatNews] With NASA in your living room there's no need to go to the Cape... 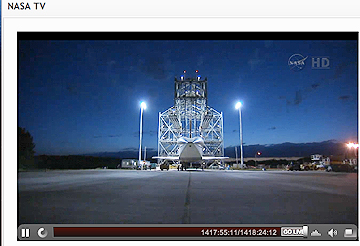 As part of the multi-year agreement, Encompass is utilizing a full transponder of C-band capacity on SES’ AMC-18 satellite to uplink three full-time NASA TV channels (two in High Definition and one in Standard Definition) to cable systems in all 50 states. Encompass is also relying on SES Occasional Use services and bandwidth to deliver most of the popular network’s launch and special event coverage.

First created in the early 1980s to provide NASA engineers with real-time broadcasts of space missions, NASA TV is today a widely watched educational network for audiences of all ages. NASA TV is focused on taking the mystery out of space through a variety of programming, including documentaries, feature stories, astronaut profiles and live coverage of important missions, such as the upcoming Mars landing set for August.

“NASA TV is dedicated to providing television coverage of the Agency’s missions and activities, and, in doing so, providing a look at space and our planet as only NASA can,” said Fred Brown, NASA Television Executive Producer. “This will offer television audiences across the country an eye-opening, educational journey into space.”

“NASA’s space shuttle program may have landed for now, but NASA continues to advance space exploration virtually every day. Encompass is honored to play an integral role in the daily distribution of NASA TV broadcasts to audiences in every corner of America,” said Jim Schuster, Executive Vice President and President of Encompass Atlanta. “Our capacity deal with SES aboard the AMC-18 satellite ensures that NASA TV will be able to reach viewers in Hawaii and Alaska with a high-quality signal equal to those received on the mainland.”

“Fittingly, in AMC-18, NASA TV is being delivered over one of the most powerful satellites over North America,” explained Steve Bunke, Vice President of North America Sales for SES. “Navigating space is a big part of our business at SES, and we’re extremely pleased to be able to contribute to NASA TV’s important mission to educate and entertain young and old audiences alike about the significance of space on earth.”

Located at 105 degrees west, AMC-18 is optimized for digital television distribution from the center of the North America orbital arc, and covers all 50 states, Canada, the Caribbean and Mexico.