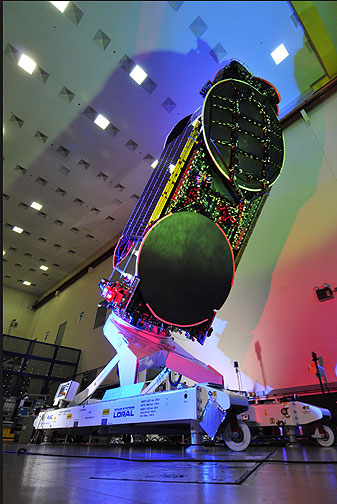 The ViaSat-1 satellite that powers Exede® Internet service has earned a Guinness World Records® title as the highest-capacity communications satellite in the world. At the time of its launch in October 2011 by ViaSat Inc. (NASDAQ: VSAT), ViaSat-1 had more capacity than all of the other communication satellites covering North America combined.

The record confirms that ViaSat-1 provides the most total throughput capacity over the U.S. and Canada—100 times the capacity of a typical Ku-band satellite and 10 times the throughput of any Ka-band satellite launched prior to ViaSat-1. Combined with the company’s innovative ground system, the new system is transforming the economics and quality of service offered by satellite Internet service. In addition to powering the 12 Mbps Exede Internet service, ViaSat-1 will provide the bandwidth for a new generation of enterprise services, including in-flight broadband for commercial aviation.

“The Guinness World Records title is an important recognition of our breakthrough technology and a testament to the work done by our team of innovators,” said Mark Dankberg, chairman and CEO of ViaSat. “Best of all, it’s allowing us to deliver on our commitment to provide a high quality customer experience for satellite broadband service.”

Since its introduction in January 2012, Exede Internet has signed on more than 200,000 subscribers. Approximately 40 percent of those customers have switched from slower DSL, cable, and wireless services.

This new record marks the second major recognition for the Exede satellite Internet service and ViaSat-1 satellite in as many weeks. In the annual FCC benchmarking report, 2013 Measuring Broadband America, Exede service led all Internet providers in surpassing advertised speeds. According to the report, performance testing among DSL, cable, fiber, and satellite showed 90 percent of ViaSat subscribers received 140 percent or better of the advertised speed of 12 Mbps (download speeds) during peak periods and 161 percent of advertised upload speeds.