[SatNews] All of the elements are now in place at the Spaceport for the Company's upcoming launch efforts...

An element for Ariane 5’s VA205 mission is unloaded from the MN Colibri at Kourou’s Pariacabo Port. This roll-on/roll-off ship also brought components for the no. 1 Vega to be operated from the Spaceport.

Arianespace’s full launcher family is now an operational reality as flight-ready versions of all three vehicles – Ariane 5, Soyuz and Vega – are together at the Spaceport for the first time. The launchers are being positioning for upcoming missions with payloads that range from compact scientific and educational spacecraft to a large resupply vessel for the International Space Station. The most recent arrivals in French Guiana are a heavy-lift Ariane 5 and the initial lightweight Vega – both of which were delivered this week to the Spaceport by the MN Colibri roll-on/roll-off ship after a trans-Atlantic voyage from Europe.  They join a medium-lift Soyuz launcher that was transported from Russia aboard the MN Colibri earlier this year. The Ariane 5 will be assembled for an early 2012 liftoff from the Spaceport’s ELA-3 launch zone with Europe’s latest Automated Transfer Vehicle(ATV), which is the third entrusted to Arianespace for orbiting. This ATV, named after Italian physicist Edoardo Amaldi, will be loaded with dry cargo, water and propellants for a rendezvous with the space station in low-Earth orbit.  It will be launched on a mission designated VA205 in Arianespace’s launcher family numbering, signifying the 205th flight of a vehicle in the Ariane series. Its ATV payload was developed in a program managed by the European Space Agency and is a 20-metric-ton-class spacecraft that serves as a vital element of the International Space Station’s logistics. 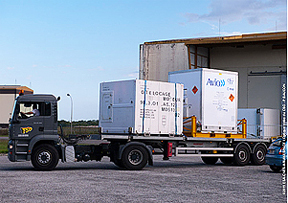 Shipping containers with components for the first Vega are driven to a storage area on the Spaceport after being unloaded from the MN Colibri.
Joining Ariane 5 at the Spaceport is the no. 1 Vega, which will soon start its build-up on the Spaceport’s ZLV launch pad for a scheduled January 26 liftoff.  This will be a qualification flight performed under responsibility of the European Space Agency prior to Arianespace’s startup of mission operations with the four-stage vehicle.  The maiden flight, known as VV01 in Arianespace’s launcher family numbering, will carry the 400-kg. LARES (LAser RElativity Satellite) along with a group of smaller cubesat educational payloads in varying sizes. 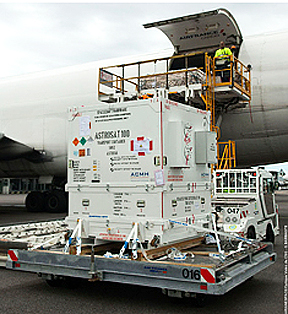 A 747 cargo jetliner recently delivered the ELISA and SSOT satellite payloads to French Guiana for the VS02 Soyuz mission in December.
Completing the Spaceport’s current launcher activity are preparations for Arianespace’s second Soyuz flight from French Guiana, with this vehicle now undergoing its build-up in the ELS launch zone’s integration building.  Designated VS02, this mission follows Soyuz’ highly successful VS01 maiden flight on October 21 at the Spaceport. For its VS02 mission – scheduled on December 16 – Soyuz will carry the French Pleiades Earth observation satellite, along with five supplemental payloads.  Pleiades will have a liftoff mass of approximately 1,000 kg., and is to operate from a Sun-synchronous, quasi-circular orbit.  Joining it on the Soyuz launch will be four French Elisa micro-satellites for the demonstration of defense-related orbital electronic intelligence gathering (ELINT); and the Chilean SSOT (Sistema satelital de Observación de la Tierra) optical satellite for civilian and defense Earth observation.